Hot Running & Being Southern but Not

By Heather Iacobacci-Miller June 28, 2013
Happy Happy Friday. It's been a long, tiring week for me. Just busy all the way around and a little hectic too. You know, life. Yesterday I took a much needed rest day from workouts and spent part of the evening working on my ISSA personal trainer certification exam.

We ended up grilling out despite the fact that it was literally 100 degrees out (that's without heat index mind you). The recipe turned out far better than I had expected and I'll share it with you for Tasty Tuesday. As a tease, if you like lime and tequila, you'll want to keep an eye out for this one ;-)

This morning my plan was to get in a couple of miles before meeting Amy for a run. I was planning on waking up around 5:15. Instead I woke up promptly at 4:45. Ugh. I knew it was going to be a hot run. The "low" was 80 degrees. Is that even really a low? Sadly, I guess so when it's 20 degrees cooler than the day had been.

I still wasn't prepared for the smack in the face humidity and warmth when I stepped out the door at 5:45. It was 82 degrees and the air was thick and soupy and there was no wind to speak of. But, I had a rundate planned, I was already out there, so suck it up buttercup.

The run was hard. It was HOT. And it would have been miserable had it not almost been laughable. At least I had great company and we did stop twice to soak in some sprinklers. I'm sure we were quite the sight. In fact, I have to chuckle thinking about it even. In the end, I eked out 8 miles then jumped in the swimming pool, which now feels like bathwater. Sigh. 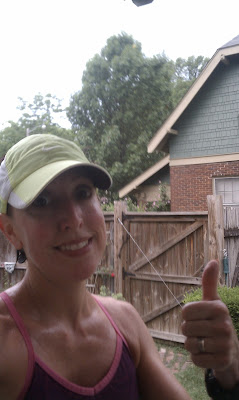 Anyway, on to more fun things. It is Fun for Friday after all! This sort of came to me during my run. I think I was hallucinating at some points this morning. But I started thinking about living in the south and what it means.

It's definitely a unique culture down here. People do move slower. And it makes sense. Trust me, you'd move slow too if it was 100 degrees (110-115 with the heat index). Seriously, all you want to do is take off your shoes, wear as little amount of clothing as possible and sit in front of a fan.

But there are some connotations with being southern. Like saying "Y'all" or loving country music. It's funny because I'm definitely a Southern Girl, but not at the same time. Let me explain:

But I'm Sort of Not Because:

So, how are you like or not like people in your region, you know the stereotypes. And, how hot is too hot for a run?