A Humid Relay Run
This morning was sort of a funny kind of run. Sometimes Jason will run a couple of miles with me before I meet up with Amy. We end up usually meeting around 6:10-6:15 depending on mileage.

Today she was going to run 2 miles with a friend then we were going to meet up closer to 6:30. Now I had to change my route/timing situation. You know how it is, you know exactly which route puts you exactly at x time. Oh now I had to think ;-)

It was funny because Jason and I did pass Amy and her friend once right when they were just about to get started, then again as they were heading the opposite direction from us. Jason and I ended up with 3.4 miles together, then it was a trade off of running partners.

Jason and her friend were done, now it was round two of the run. Amy and I zipped on along chatting away…and sweating away too. When I checked the weather before the run at 5:30 am, it was 77 degrees, humidity was 83% and dew point of 71. Folks, that may as well be water instead of air.

We were both slinging sweat with every step and move of the arm. Nice imagery right? The run was definitely tough. We gladly stopped at intersections to let cars pass by, often praying and hoping we'd get lucky and have to stop, cursing if that didn't happen.

But, we had a really great conversation about running, what it means, how it can literally save your life (I plan on sharing this). So that definitely helped keep us focussed on the positives and not the horrid humidity that was smashing us down.

We rounded back to her place at 7 miles for her, 7.6 for me. So I thought I'd just make a final loop and hit 8 miles solo (3rd leg of the run). I swear it felt like a really strange relay race only I never got to stop running. I ended up going for it and hit 9 miles. I immediately jumped in the pool to try to cool down.

So, 9 miles done at my Summer Pace. Tough, hot, humid. The perks of the run were running with my husband, running with Amy, great conversation, and capping it off with a few solo miles to reflect.

Humidity and Running
Sometimes timing can be everything. Last night I was thumbing through the latest issue of Runner's World and there happened to be an article about running in the humidity. Actually, I wish this article had come out last month, but better late than never.

I took some of the advice, one of which was to not wear a hat. I always wear a hat, always. Today, I did not and it truly made a difference. It wasn't night and day, mind you, but it certainly did help with the feeling of over-heating. I also decided to do a little bit more research on running in the humidity.

It seems that some people are affected a lot more than others. I feel like I'm that overly affected person. Maybe it's just in my head, but after reading that article and others, probably not. I do have asthma, which is always exacerbated by humidity as it is. I also have very salty sweat and am very sensitive to electrolyte loss.

I've had a few runs this summer where I've gotten light-headed. I've been weighing myself before and after my runs, but never really knew the calculations to know exactly how much liquid I'm losing and what that really even equates to really.

So, after a bit of digging around, I thought I would share a little bit of what I have found: 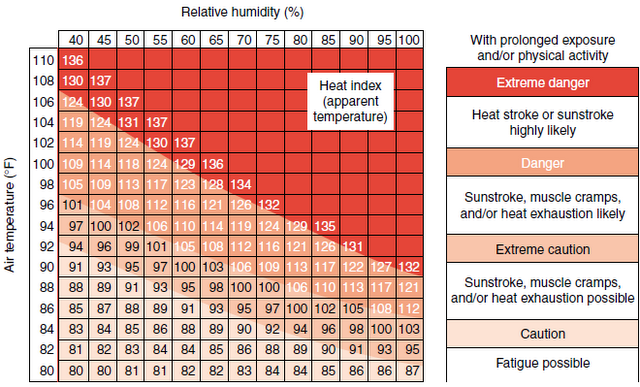 No internal AC
It's not just the heat of summer that causes runners problems, it's also that pesky thing known as humidity. We all know the heat can be dangerous, but humidity thrown in another wrench. Our bodies sweat, sweat should evaporate, we should cool down. When it's humid, the sweat can't evaporate. This means we can no longer efficiently cool our bodies.

Heart Rate Increases
According to Runaddicts.com, it can increase up to 10 beats per minute in humidity between 50-90%. The heat alone can raise it up to 10 bpm between 75-90 degrees.

So couple that with humidity and your HR starts to edge into the 165 range, which would be close to 90% of your max heart rate depending on your fitness level. That makes for a very very tough run when you feel like you're training at max capacity.

Ditch the Hat
Opt for a visor or head band so that heat isn't being trapped under your hat.

Hydrate
Weigh yourself before you run (naked), track the amount of fluid you take in during the run, then weigh yourself again (naked) after your run. You then subtract the pre-run weight from the post-run weight and add in the fluid consumed to get the total fluid lost. Divide that by the number of miles run. This gives you an idea of fluid needed per mile.

Slow your Pace - For Real
According to Jeff Galloway, these will be the percentages to slow for heat (doesn't include humidity factor)

Know the Signs of Heat Exhaustion
You can visit Mayo Clinic's site for a more in-depth list. Here are just a few signs and if you suspect heat exhaustion, stop running! Get in the shade, lay down, drink something cool, put a cold towel around your neck - basically you need to get your body temp back down.


You can also suffer from Heat Cramps as well as Heatstroke. Know the signs!

Some other tips that are just my own:

Do you have any additional tips, advice or articles to link to? Please share!