By Heather Iacobacci-Miller July 30, 2013
Last week Jason had picked up some heirloom tomatoes. I had grabbed kale. I really had no specific plans for the kale, and Jason had just been using the tomatoes on sandwiches. But when it came time to come up with something for dinner, I thought the kale and tomatoes would go really well together along with some Greek flavor profiles like olives, feta, sundried tomatoes.

Initially, I thought I might just go with quinoa, but realized I had some Israeli couscous in the cabinet. So, I decided to go with that instead. I knew it would have a lot more texture and bite to it. And if you don't have the Israeli couscous, you can use any grain of choice. I think orzo pasta would also be fantastic.

In a large skillet, sauté onions, garlic, and kale in wine. Cover to allow kale to steam.

When the couscous is done, transfer to a large bowl and add in the vinegar, parsley, salt, and nutritional yeast flakes. Stir to combine. Add in the olives, chickpeas, and sun dried tomatoes. Once the kale is done, add to the mixture. Allow to cool some before adding in the feta and fresh tomatoes. Gently mix. Serve room temperature or cold. 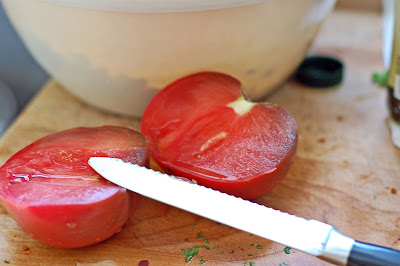 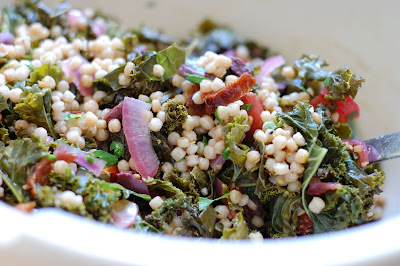 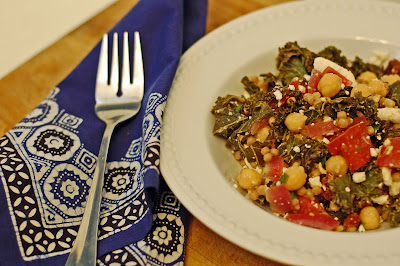 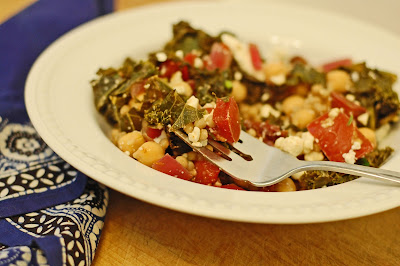 I loved the extra texture the Israeli couscous added to this dish along with the texture from the kale. I'm not normally a raw tomato fan, but the heirloom tomatoes were a whole new ballgame. So full of depth and flavor.

What's even better is that this can be eaten room temp or cold. So, you can prepare ahead of time. It would be fantastic to take along on a summer picnic as well.