By Heather Iacobacci-Miller July 23, 2013
I don't know about you, but when it's hot out, I tend to crave more watery fruit like pineapple. We've also been grilling most days, especially while we were painting the kitchen cabinets. Since I just happened to have a pineapple on hand, I decided to come up with a way to grill it.

At first I had thought about sandwiches, but I ended up going with a quinoa salad instead using tempeh and veggies. I wanted to try to infuse more of the pineapple flavor in the tempeh while it poached, so I also made a puree of the pineapple.

Directions:
Turn on your grill or heat grill pan.

Rinse quinoa and add to a medium saucepan with water. Cover and simmer until liquid is cooked out - approximately 14-20 minutes.

Cut pineapple in half and remove the core. Take about 2/3 of one half and cut into cubes. Place in a blender with the jalapeno and ginger and puree. With the remaining pineapple, cut into thick slices for the grill.

In a non-stick skillet, combine water, bouillon cube, pineapple puree, garlic and bring to a boil. Lower to simmer, add in the tempeh and cover. Allow to simmer approximately 15 minutes then flip. Cover and cook another 10 minutes before removing lid and allowing the sauce to thicken.

Remove tempeh from pan and reserve the remaining thickened sauce. Add tempeh, bell peppers, zucchini, and pineapple to the grill. Rotate the bell pepper until charred. Remove and place in a sealed container to cool.

Once peppers are cooled, remove the skin and dice. Remove tempeh, pineapple, and zucchini from grill once done and dice.

Combine the leftover sauce with quinoa, veggies and tempeh in a large bowl. 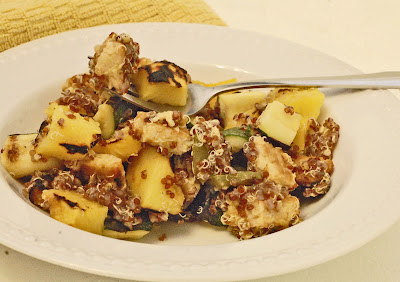 I loved the additional flavor that the grilling process added to the pineapple. My only complaints here are that the jalapeno wasn't a very hot one, so I should have used two. I didn't necessarily want it hot, but I did want just a hint of heat to go with the sweetness of the pineapple.

The other issue (for Jason more so than myself) was texture. He mentioned that he would have like a little more bite to the dish. So perhaps served over rice or barley instead or maybe adding in cashews.

Do you find yourself wanting more fruit during the summer, especially water fruit?