By Heather Iacobacci-Miller July 02, 2013
Miles and Miles
Happy Tuesday! Don't know about you guys, but I'm super excited for a short week. I'm also super excited about a major cool down we have had here. Last week it was 100+ degrees. Then over the weekend we had a cold front move through. Usually a "cold" front at the end of June means 95 degrees instead of 105. But this time? For real cold front.

We actually have low temps again. As in 65 degrees low. A-mazing! Let's just say I've covered a lot of miles recently. Sunday Jason and I biked about 27.5 miles. Then yesterday another 20.4. Lots of miles being covered here. The only downfall of this cooler weather is crazy winds that are bringing it in.

This morning I managed my first double digit run since mid-May. I got in 10 fantastic miles and it looked like I had run not swam. I got a little over 3 in then met up with Amy for 4 before finishing out the rest of the miles.

Oh, another perk of the cooler temps? A speedier run that didn't make me feel like dying. I am somewhat giddy about it all. Of course, I know it'll be short-lived so I shouldn't ge too used to this weather. But I'm sure going to take advantage of it while it's here.

Tasty Tuesday
As I've mentioned a few times, we've been doing a lot of grilling this summer. I tend to stick to tried and true grilling methods and combos that I know work. My go to marinade is a balsamic blend usually with a grain mustard and maybe some fruit preserves. Basic, but it works and doubles as a dressing.

But, last week I got a little more creative with my grilling for a change. Jason had picked up some poblano peppers and we had corn on the cob. It's hard to beat grilled corn on the cob when it's perfectly sweet.

He had also picked up a bag of limes because he had wanted margaritas. I took full advantage of that loot and decided to go for something with a bit of a kick. Lime and tequila go together, right? Actually, I really don't like tequila so I don't know what goes best with it. But the point is, that even a non-tequila fan will enjoy this one I do believe.

Directions:
Whisk together the lime juice, balsamic vinegar, olive oil, honey or agave, tequila, and spices. Pour over your tofu and allow to marinate for at least 30 minutes.

Start your grill, grill pan, or even your oven. Grill the poblano peppers whole until the outside is nicely charred. Remove from heat and place in a container with lid and allow to cool. This will make peeling the skin much easier.

Grill your corn - I prefer to remove silks and leave husks on - but you can also wrap in foil or place directly on the grill. Grill the tofu until nice and firm and grill the zucchini, but be careful and not over cook or it will be mushy.

Once the poblano is cooled, peel and dice. Cut the corn from the cob and dice your tofu. Toss everything onto a bed of lettuce and drizzle with leftover marinade. 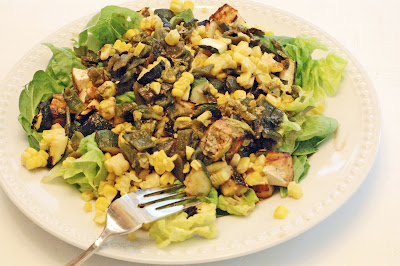 This simply screams summer - it's refreshing and crisp. The sweetness from the corn offsets any heat from the poblano pepper.