By Unknown September 24, 2013
This weekend was just about perfect. Friday, we headed out of town to Branson, MO. It was pouring rain, incredibly dreary. And made for a longer than normal drive that direction. We were heading there to meet up with Lindsay (Cotter Crunch) and her husband. He was racing in the Rev3 Triathlon on Sunday. They had a fairly crummy drive themselves unfortunately.

But, everything that Friday was, Saturday was the opposite. We woke up to crisp, clear skies, amazing temperatures, just perfect. Even better, I got to run with Lindsay and my husband. There is a path that runs alongside Table Rock Lake.

It was such a fantastic run for so many reasons. The weather, the views, but mostly the incredible company. Lindsay is such a sweetheart. I just can't say enough good things about her, and her husband as well I might add. 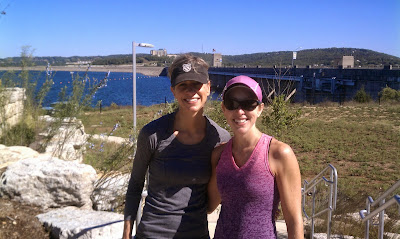 We got in a fantastic 6-mile run, then we went back to the condo to clean up. She had sherpa duties (aka hitting the expo with her husband). So the plan was that we would meet up with them at the expo at a later time.

The expo was taking place at The Landing, an outdoor mall that overlooks Lake Taneycomo (which really looks like a river not a lake). They were going to head back to the condo and rest up for a bit. In the meantime, Jason and I had a late lunch. Hard to beat a nice lunch with awesome water views. 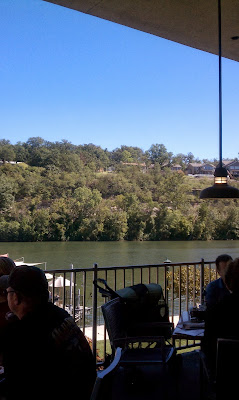 If you're in Branson, you sort of have to hit the outlet mall. So, we did just that. I scored a great deal on a sports bra, then Lindsay and I found some super cute and comfy tops and yoga capri pants at the Gap. I think it was a pretty productive shopping trip.

Sunday was the big race day. Lindsay and James had to be up and out the door super early. We were going to head down to The Landing to watch the bike transition and the run around 9 am. Unfortunately, we never got to see James race. He had mechanical issues with his bike and had to quit the race. Very disappointing day for the Cotters.

Jason and I stuck around, cheered on the athletes and watched the first pros come in, then we went back to the condo to say goodbye to the Cotters. They had to hit the road for a long drive back home. I hated to see them go, especially after how the race went.

But, I am so incredibly thankful that it worked out that we finally got to meet up. And we're talking about plans for Branson next year so James can come back and finish that race. Plus, it's a good excuse to meet up again right?

After they left, I enjoyed a nice glass of wine overlooking the golf course from our condo balcony. It was a lazy rest of the day. Pretty perfect if you ask me. 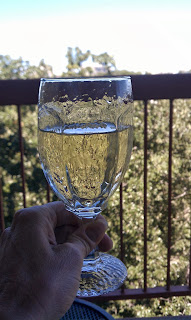 What would be your perfect weekend?