By Heather Iacobacci-Miller September 04, 2013
To say this week is totally off kilter is a mild understatement. Of course Monday was a holiday for us, so that throws off the week from the get go. But now my running emotions are all over the place.

Because I was off Monday, I had decided to get in my 10-mile run. Well, originally I thought I would do 6. The decision to go farther came a little bit later, and how I came to that one I had no clue (you'll understand in a moment). What I failed to take into consideration is the insanely hot, just shy of 40 mile bike ride Jason and I had gone on the previous day.

And of course it was still hot and humid Monday. It was 77 degrees when I set out just after 7am. Thankfully there were a few sprinkles along the way. That was about the only good part of the run it turns out. Oh, and because my initial intention was 6 miles, I didn't eat anything prior to the run. Yep, keeps getting better for me.

From the start, I felt off. I couldn't seem to get my breathing regulated, my form was a mess, my pace was all over the place. I actually ended up stopping a couple of times to just try to regroup. And when I stopped, collected myself and started again, that's when I would think, "Oh go ahead and just add on another mile or so." Yes, I'm a glutton for punishment.

Then of course I found myself heading into 7 miles so I decided to finish it out for a long run. It was shear mental willpower that got me through 9 miles. But after 9, all willpower was gone. I waved the white flag and called it done.

It was really the first bad run in a while, so I can't complain too terribly much. I've been on a good streak lately. And I had the deck stacked against me when I stopped to analyze what went wrong.

Tuesday's run was supposed to have been a much slower, recovery type of run. I tried to go into it not automatically assuming it'd be bad. You know how you can start setting yourself up for failure sometimes. It ended up being a pretty fast run. Much much faster than I had intended, but sometimes you just go with it.

We did stop and take a picture of the sun starting to come up over the Clinton Pedestrian Bridge. The sunrise over the river is almost always spectacular. It wasn't an easy peasy run. But it wasn't a horrible run. Much better than I had anticipated. Of course, it ended up being slightly marred by the realization that I had seen a dead man.

I ended up opting out of run this morning with plans for biking after work. But, in thinking about running tomorrow, I have mixed feelings now. Part of me wants to run back by that particular spot to sort of face some inner demons I'm experiencing. Part of me never wants to run that route again, ever. And now I am feeling a bit trepidatious about running solo.

Note: this is me just blogging out my feelings, so please excuse the messiness. 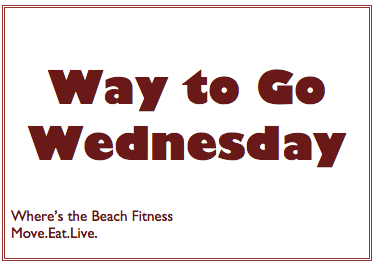 Rather than end on a somber-ish note, I want to find something to be excited about. I've been a little remiss on my Way to Go Wednesday posts. So let's get back to it today!

Brian (Pavement Runner) for taking on the Dumbo Double Dare.

Kierston (Candy Fit) for taking on a 7 hour hike up Mount Marcy.

Krysten (The Misadventures of a Darwinian Fail) for tackling the Ontario Women's Triathlon.

Lindsay (Cotter Crunch) for sharing The Slow Down Challenge. I think we could all benefit from this one.

Who do you want to give a shout out to? And will you be participating in the Slow Down Challenge?