Riding in the Rain

By Unknown September 19, 2013
Do you ever get something set in your head to the point where you refuse to go with a different plan? No? Just me?

Well, yesterday the "plan" was to go for a bike ride after work - me, Jason and Amy. It was Jason's birthday and what better way to celebrate than exercise right? Surely you all agree. He had actually gotten up and done his weight workout in the morning per my workout rotation I've set up for him. Yep, training my husband. I haven't decided if that's a good thing or not. I think he firmly believes I'm trying to break his muscles.

Anyway, the plan was to ride after work. Around 5:15 I sent him a message asking when he was planning to be home, since he was supposed to be home "around" 5:15. He had a snafu situation at work.

I texted Amy to see if she might want to try for a run instead. You see, not only was Jason stuck at work, but storms were popping up all around us. So there I sat, squeezed into in my diaper-like bike shorts and top, shoes on, ready to go. Only problem is that I don't have a rack on my car.

My wheels were turning. I thought maybe I could figure out how to get the wheel off the bike and get it into my car and still meet up with Amy. After 10 minutes of fighting with the bike, I sent her a ranting, cursing email that I couldn't get the bleeping wheel off. I had grease on my legs and hands and was sweating like I had been working out. All the while, it was getting darker out.

She stopped by and we finally got the stupid wheel off and wrangled the bike into the car. It took both of us to figure out that puzzle. Finally, we were off to our destination to start the ride. As soon as we got there, the sprinkles started. And ... they never stopped.

But, we were both so hellbent on riding, that we hopped on the bikes and took off anyway. I won't like, I was pretty nervous about riding in the rain. Jason had warned me that it can be a little slippery. The last thing I need is one more obstacle to keeping me upright on a bike.

Of course, the rain got harder. And, my glasses were so spotted with the drops I could hardly see, but on we went. It's probably not ideal to have your running/cycling buddy and friend be as stubborn as you are. Two stubborn women together? Well, I think you understand how that one plays out.

At one point, we did have to finally stop to take off the glasses just to see. And not only was it darker because of the rain clouds, but it was actually getting dark period. Amy had wanted 20 miles, which was the plan of course. But, I sort of pushed for us to start heading back a little sooner. Smart decision of the day. See, sometimes I can be smart.

By the time we got back, we were covered in mud and grit, pretty much soaking wet, but darn it, we got it done. 16 wet miles done and done. 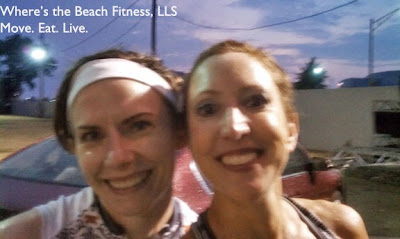 Do you ever get yourself so set on something that you refuse to back down?