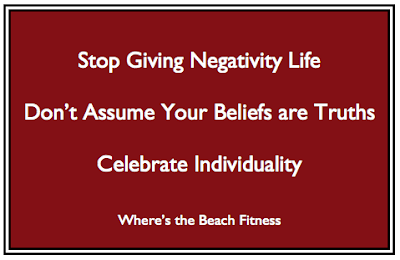 I'll just apologize in advance for this semi-rant. Today I had meant to do a light-hearted post. I mean, it's Hump Day after all. And I swear something's in the air making everyone view this as the longest week ever already.

But, I had posted something on Facebook last night then read Laura's (Sprint 2 the Table) fantastic post, Here's to the Kids. She talks about being judgmental, both happening in real life and also things being posted on social media. And she's so right about that. Definitely check out her post.

Last night I posted that I had been more absent from social media because I was so sick of the negativity. The bashing of others (judging basically), the constant negative "woe is me" and "FML" posts, the political ranting and raving. It gets old. Really old. And kind of sad.

Is your life that bad that you have to say, "FML?" I hate that acronym just about more than any other. And if you don't know what it means, I did have to ask at one point, it's F$ck my life. Bad things happen. But life is so so very short to get so caught up in the woe is me attitude. You're missing out when you're only focussing on the negatives.

People have cancer, lose spouses, family members, pets. People suddenly can't run or be active because of injuries, illness. People lose jobs. Life can be hard. But to post constantly about how down you are, how sick you are, how everyone should feel sorry for you gets old.

Everyone has their issues. Just because someone's not openly sharing that they're sick or depressed, or whatever, doesn't mean they aren't going through something as well. And the more you dwell on it the more you make it bigger than it is. Stop giving that negativity its own life. Don't let it live!

Find positives each and every day. No matter how small and trivial they might be. There's something that makes you smile, that made your heart lighter. There's still beauty around you/us when we stop and notice. Those are the things that keep us going.

And the political ranting. Rant all day long, it doesn't change anything. Sorry. It doesn't. And when you're bashing a Republican or Democrat or whatever, you could be talking about your BFF, daughter, sister. Just because you hold those opinions, it doesn't mean everyone does and it doesn't make them some crazy evil person either. Remember that please. Everyone is entitled to their own opinions and beliefs. Don't judge based on your beliefs and assume that makes you right.

And about that judging ... same holds true for judging the way others look, what they eat or don't eat, their workouts of choice, maybe even their non-workouts. If you don't run, that's fine, but don't tell me I'm crazy for doing it. Don't assume that because I run three days in a row that I'm automatically over-training. I love running, moving. And I'm feeling healthier than ever. It's a great feeling.

I have seen so many people bashing CrossFitters lately as well. On so many levels. I don't do CrossFit, but I'm not judging anyone for doing it. They like it. That's fantastic. They're working their butts off. If someone is pregnant and chooses to workout, don't assume they're harming their child. Chances are their doctor is fully aware and has given them the ok.

The thing is, we're all individuals with unique likes and interests, and beliefs. If we all did the same thing and thought the same way, life would be boring don't you think? Celebrate individuality.

And this isn't directed at anyone in particular or any specific event or incident. In fact, I'm reminding myself as well.