By Unknown October 25, 2013
Marcia (Marcia's Healthy Slice) did a fun post the other day - Runfessions. Her post definitely got me to thinking about my own running confessions. Rather than ramble on about nerves for tomorrow's Half Marathon, I thought it would be fun to share a few of my own Runfessions for Fun for Friday. 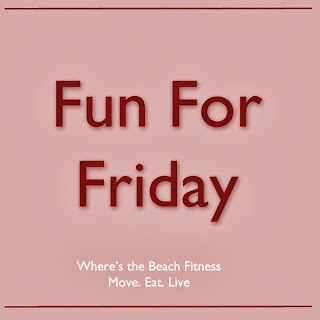 Dumpster diving - I am always on the lookout for things I might be able to go back and get to take home and restore. Sunday it was a headboard. Sadly it was broken beyond repair when Jason and I went to pick it up. Wednesday I stopped long enough to try to peer into a dumpster in front of a house. It was too dark and I was too short to really check it out properly.

I've gotten Jason and Amy both in on this one. Jason has brought home a chair and table on his own accord. The chair still needs painting and a cushion, the table has already been painted and is acting as my new office desk.

No training plan - nope, I didn't follow a training plan for this half, not in the true sense. I logged long runs and sort-of-tempo runs. But nothing was exactly spelled out. I didn't do intervals; no hill repeats, though I did try to run hills and end my runs on a hill.

My tempo runs were sort of accidental really. And probably not true tempo, rather they were a fast run from start to finish. There were a few times over the last 4 weeks where I did consciously pick up the pace during my long runs after about 3 miles in then slowed for the last mile.

Not fueling (consistently) - Ok, this is more of an inconsistency thing and not a blatant, purposeful not eating. If it's a short-ish run and I'm not hungry, I don't eat anything before. If I'm already hungry I'll have PB and rice cake. Long runs I do always eat the PB and rice cake or banana and PB. But I've not been taking any gels. Not even for the last 13-mile run I did.

When I walk in the door after a long run, however, I do immediately grab something to eat though even if I don't think I'm hungry - either protein shake, greek yogurt with berries & PB, cottage cheese, or even a protein bar if I'm lazy. But I've not been feeling crummy at all with this habit, so maybe I've just trained my body.

I'm not fast & I'm not slow - Maybe this isn't so much of a confession as it is a truth. I'm faster than a lot of people, but way slower than a lot of others. I fall into a weird mid-range and I'm too lazy to work hard enough to bust out of it. Guess saying I'm lazy is the real confession here.

I want my outfits to look cute - Yep, I do want to match. I don't always though, but man I want to. Not in a cutesy way, but in that, "Man I love her running top and shorts" kind of way.

I sweat, a lot, like a lot lot - It doesn't matter how cold it is, I still will look like a sweaty mess. Anything over 60 degrees and I typically stick with dark colors so it doesn't look like I peed myself. During the summer, I can literally wring my shorts and top out. Gross, yes. I almost wrung shorts out in a measuring cup just to see how much sweat they held. Even grosser I realize. Confessions and I'm honest.

Ok, your turn - runfessions or any confessions!