By Unknown October 28, 2013
I wanted to write some fantastic, funny, witty race recap. I always enjoy those. Apparently I don't pay enough attention to the details during my races though. So, here's my race recap from the Soaring Wings Half Marathon as best as I can tell it. 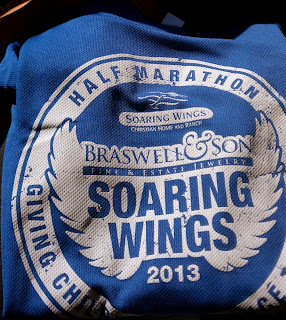 Saturday morning started off super early, dark, and cold. We woke up around 5:30. I wanted plenty of time to wake up, get breakfast down, and allow for any delays. Let's just say Jason can be hard to get out the door sometimes.

After lots of debating, I ended up wearing shorts and a long-sleeved top and throw away gloves. It was about 40 degrees out, dry, little wind. I should have gone with short sleeves, but I just couldn't convince myself. At least I was able to push my sleeve up during the race. I also ditched my water bottle for the first time. I feared this would be my undoing for my time goal.

The race was about 30 minutes away. Not a horrible drive, but just enough to make me nervous when we got close and had to find parking then walk to the facility to check our bags. Oh, and the lines for the bathroom were crazy long.

Someone came over the speakers announcing that race time was about 10 minutes away, head to the corrals. I got myself into what I thought was corral B, then Jason showed up and asked why I was with that group. Oops. We wished each other luck and I moved into corral B. What the heck was I doing there? That's the fast group. Oh man, can I do this <--- thoughts in my mind.

I kept checking my Garmin and it was already after 8, still no start. I was chilly, nervous, bouncing around to let out energy and warm up. I suddenly had to pee terribly, but it was far too late for that. We finally got going about 7 minutes after 8. I was swept away with the group, moving faster than I had intended. But feeling great, that's how it is before mile 1 right?

Clearly he was pacing way faster than 1:45. But I didn't know the time that had elapsed until 6.2. The screen on my Garmin was for pace and average pace and I didn't want to fudge around with it to find the elapsed time. So all I knew was that I beat my old 10K pace (hit 10K mark at around 48:15) and was still holding strong. Not only was I beating my old 10K, but also my best 5K, yet I was running a half marathon.

The more I let those thoughts creep in my head, the more I wanted to slow down. The more I doubted, the more I started to feel the urge to be conservative rather than to allow myself, no give myself permission to just go with it. To run fast. Why was I going to hold myself back? Because I had it in my head that I couldn't possibly go that fast. Fast was going to be maintaining 8:15. I couldn't possibly hold the pace I was at. But I was.

I gave myself permission. I let myself run fast and also have fun. I waved, I thanked people, I joked with people even. Me? Yep.

I always love reading the race recaps that are full of whit and humor and fun happenings along the routes. Not much interesting happened. The crowds were good, but not thick by any means. Most seemed to be there to cheer on someone they knew. But, occasionally they would read names off of the bibs and cheer that person. There were pockets of activity at least.

At one point (mile 8-ish), after passing the 1:45 group, I noticed this guy next to me. Like really close, but not super annoying, just close. And I increased or decreased speed, so did he. He wasn't swerving into me or breathing heavy or anything obnoxious at least. Just glued to me. I kept looking over and finally he said he was sorry. He thought I was holding steady at a good pace and wanted someone to help pace him. Me? Pacing someone fast? Yep.

I decided to take advantage of the rare opportunity to chat with someone. He was from Idaho and had just recently moved to Little Rock. He was a former couch potato who had only been running 3 years. He had lost 40 pounds and this was is first half marathon. Wow. Talk about inspiring!

We paced together for about 2 miles before he started to edge ahead. This was just after mile 10. I guess one funny thing did happen. Well, totally embarrassing for me actually. I had gotten water at an aid station and was trying to toss my cup in or near the trash can. They were very very particular about not littering on the course. Like really specific about that direction. I totally misjudged and the cup hit smack into the back of a really tall guy who was also tossing his cup into the can.

I apologized profusely. Had my face not already been red from the cold, it would have been from embarrassment. I felt terrible, but he was such a trooper. He totally laughed it off, said it felt great actually. I joked that at least it wasn't sticky Gatorade. Also joked that apparently I was a runner not a thrower. Maybe that's why the Pace Guy inched away from me ... hmmm...

Miles 10 and 11 were strong. I was holding steady with a 7:38 average. Wait ... say that again? Recheck Garmin. Yep, that's what is says. Ok, I've done it this long, there's no stopping now. Push. Push. Push. Mile 12 is at the top of the steepest hill on the course. I refused to back down. I took that hill with everything I had. I passed people. I kept pushing. My reward was the free speed and recovery downhill. And I took it. All of it. I leaned into it and let my legs fly. It's an out of control feeling, but I knew I that's what I had to do.

There had been two guys chatting away behind me for most of the race. They started to inch past me. I was trying to strategically plan when I needed to give it that last ditch effort. Did I go for it with half a mile left? Was that too soon? Was .3 miles too late? I was afraid I might push too hard too soon or that I'd hold back for too long.

The crowd was beginning to roar. The finish was so close I could almost taste it. I knew that I was a minute behind corral A, so the clock was showing 1:40. I couldn't believe it. Keep going. Keep going. Out of nowhere, a girl passed me. But I had nothing left in the tank. I literally could not push any harder so I was very much ok with her effort. No jealousy or doubt in myself whatsoever. I crossed in a way I have never done before - arms high and tears stinging my eyes.

I'm a very emotional person, but not externally. I don't often show how strongly I feel in the inside. But I could barely control the overwhelming emotions from that finish. I looked at my Garmin - 1:39:57 (unofficial). Somehow I expected the official to be slower than that, but I was still going to be proud.

I made my way to the aid tables and grabbed two cups of Gatorade. The girl who had passed me actually congratulated me. She must have been behind for some time and maybe overheard me talking with the Pace Guy. I had mentioned that this was going to be a PR if I got under 1:50. So, she said, "This was a PR right?" Yes. Yes big time I told her. I congratulated her for her strong finish and she congratulated me. Runners are awesome by the way.

I made my way to the bag check so I could get my dry clothes and snacks. I wolfed down a Clif Bar and finally found the water and waited on Jason's finish. He finished strong at just under 1:46, a PR for him as well.

Jason is always one for numbers, so he immediately wanted to start checking the finish times, splits, and all that. My official time was 1:39:56 and he noticed that put me 4th in my age group. Wait...what? I might get an award? Holy crap. 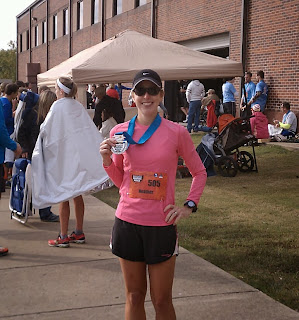 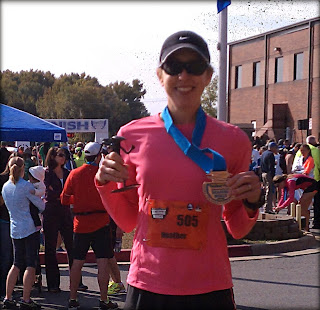 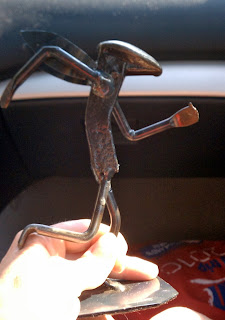 When was the last time you gave yourself permission to do something you didn't think possible?

(Thank you Lindsay for reminding me to give myself permission. And thank you so much for the support, encouragement, wishes of luck & congratulations from so many amazing, inspiring, friends.)