By Unknown November 04, 2013
It was another weekend of productivity and relaxation. I love that balance. We had a cool down Friday night. Jason and I decided to take advantage of that and put our run off just a bit. He went to go watch his nephew's last football game, and I scrubbed and cleaned around the house. It felt good to be productive right off the bat.

When he got back, around 11, we headed out for a run. I was planning on 10 miles for the Fall 5 or 10 Miles Virtual Race Series. Jason was planning on more like 8. It was gorgeous out, low 60s, but crazy windy. At first I thought it was coming from the north, but then realized it was also coming from the west. Actually, it seemed to be swirling. It definitely made it more challenging. 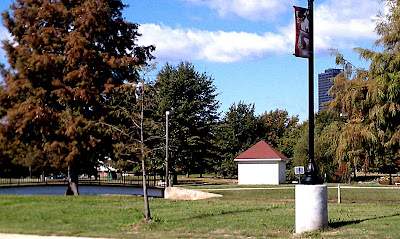 Jason dropped around 7-ish miles and I continued on. I decided to head north towards a park. I stopped and took a picture when I hit my 10-mile mark for the race. My watch picture didn't turn out at all (1:24:24), but I did get a nice picture of the park at least.

We both got cleaned up and headed out for a late patio lunch. Later, we met up with friends to watch part of the football game. The rest of the evening was pretty low-key with feet propped up.

Sunday, Jason headed to the lake to go fishing with his dad. It was another gorgeous day out and I was so tempted to run. But, I needed to cross-train. So, I pulled up a movie and watched that while spinning on the bike trainer. I also did chest and abs. I've been slacking on chest.

I ran several errands and then got busy with food prep. In other words, I totally undid the cleaning I had done the previous day. I had pots, pans, measuring cups, spices and flour spread out everywhere. I pressed tofu for the week, made spaghetti sauce, homemade ciabatta, and seitan. And of course non of that was eaten for dinner. 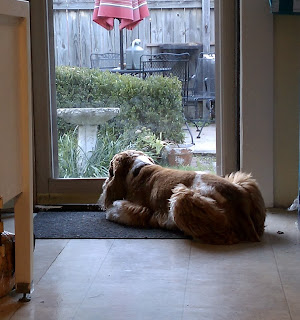 Heath Man was annoyed with the hustle and bustle in the kitchen and spent a solid hour at the back door waiting on his daddy to come rescue him from the mayhem.