By Unknown November 08, 2013
It sure feels like it's been a LONG time since the last weekend occurred. Our household has had some major ups and downs with the pupsters.

Last Saturday, Maddie started throwing up then having major diarrhea and then not wanting to eat. After a call to the vet, and some anti-everything meds, she seems to be back on track. She was feeling good enough to eat the most recent bed I attempted to buy for them.

Now Heath Man is under the weather. It started the other day when he didn't want breakfast. But he did eat dinner. Then the next day he refused both. He's not acting super listless, but he's starting to be less peppy and not wanting water either. This means another trip back to the vet. And we're pretty certain it has to do with his Gallbladder Mucocele disease.

He's been on medication since his diagnosis and has responded astoundingly well. The vet was actually surprised by how well his levels (whatever all they measure) were at his last visit. Not sure what's suddenly changed. We have been warned that this is likely what he will die from, however. I'm just hoping it's much farther down the road.

So, I've had a lot on my mind this week. Feels like I should be making some confessions. And, after being inspired by Christine's "Confessions" post yesterday, I thought I would borrow that idea for today. Don't worry it's nothing as serious as Usher's Confessions


1. My piriformis issues have started acting up again. I am pretty sure it stems from pushing so hard at the Soaring Wings Half Marathon and that I've been slacking on my leg workouts where I had been fairly diligent about focusing strengthening hips, hams, glutes.

2. Sometimes I go to bed as early as 8:45 pm. I feel a little guilty, like I'm missing out on something. But, I don't really watch tv, and reading makes me super sleepy, so I just doze off.

4. I sort of dread Thanksgiving because it's such a huge celebration around food and traditions that involve meat. I am very lucky that my family does go out of their way to make sure that I have something special, something that's mine so I don't have to bring my own T-Day meal with me.

5. I bought a nail polish color based only on the name - It's Wine O'Clock. I mean, how could I not buy it?

6. I missed my rest day this week and did biceps, shoulders and some legs instead because I am struggling to fit it all in these days. I atoned for this error with DOMS yesterday for my morning run then even more so when I met up with a client to work with her on running. Yay me for being stupid about it. Do as I say, not as I do.

7. Sometimes I doubt myself as a fitness trainer and definitely as a running coach. I probably shouldn't confess that one, but I think it's likely true of most teachers. I mean, I'm taking control of some really major parts of someone's life - their health and fitness. But I love helping people and can't even begin to describe the joy when someone tells me they increased their weights, they ran farther than ever before, they've lost x number of pounds or dropped x % of body fat. Happy Heart.

8. I half hoped that Amy would say she didn't want to run this morning. But am so glad she didn't. It held me accountable and we had a great run, despite slamming my left hip into a large metal trash can. I had the entire road to the right, but somehow I managed to run into that darn barrel. All you could hear was a loud "dong" echoing. I was laughing so hard I almost had to stop running. Oh, and if I hadn't gotten up, then I would have missed a beautiful sunrise. 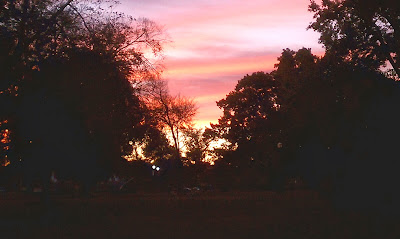 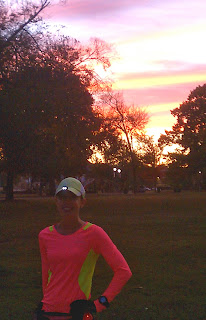 AND --> Don't forget to enter my Beats By Dr. Dre Headphones Giveaway! Winner will be announced Monday.