By Unknown December 16, 2013
If you recall, I posted last Thursday about not feeling truly prepared for this half marathon. We had been having very cold temps that seemed to be negatively impacting my running. My last training week was slow and felt very difficult overall.

Luckily, the temperatures for the CASA Half Marathon had started to go up. Race start was 39 degrees with a "feels like" temperature of 36. The problem was that it was heavy fog and the winds were starting to kick up. This means damp and raw basically.

The CASA Half Marathon is a small race. It's one I had not done before. I decided to sign up for it on the tail end of the PR high from the Soaring Wings Half. Sometimes I think there should be a law that states you must wait x number of weeks after one race before signing up for another. Seriously, runner's amnesia can bite you in the butt.

But, I signed up for it. I was going to run it. It was a flat course, so I was kind of looking forward to that for a change. But, I was also trying hard not to put unnecessary pressure on myself to get another PR. Technically, if I could crank out at 1:39 on a crazy hard course, then this one should be a breeze right?

Well, any runner knows that each run is different, just as each race is different. You can never predict what will happen. Sometimes it can even change mid-run. Running literally keeps you on your toes. Not for the faint of heart and difficult for a Type A personality who likes to plan. 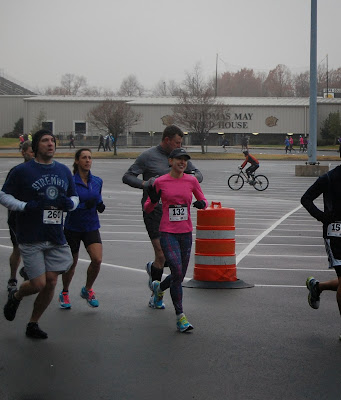 You can see how gray and dreary the morning was. This was at the start of the race and I was all smiles. The course was basically a large out and back loop. I wish I had been able to get pictures of the course. We ran through a park area around a lake. Had it been bright and sunny, it would have been quite pretty.

Part of the route also took us through what I'm assuming is a drive through Christmas Light exhibit. As dark as it was, I wish they had gone ahead and had all of the exhibits lit up. It would have been something to see for sure. The race was so small that the only crowd support was from the volunteers at the aid stations basically. The lights would have been a nice perk.

Now, let's get to the nitty gritty of the race - the pace. I am not one to sugar-coat things. This race wasn't my best, but it was. I ended up mentally checking out by mile 9.

My first mile was a 7:45, and that was fine. The first part included a few sharp turns before getting straightened out. At least the runners thinned out fast because there were so few of us. I started to pick up my pace, hoping to average a 7:38, which would put me at my last race time of 1:39 and change. I figured if I kept that up for 10 miles then I could pick up the pace for the last 3 miles depending on how I was feeling.

The first 4 miles were un-eventful. I was getting into my zone, finding a good rhythm. The miles were clicking off nicely. I was keeping what I thought was a 7:35 pace. My Garmin was way off though, on the conservative side, which was probably good for me mentally. I stopped completely at the 2nd aid station to get in water. My pace was such that I was breathing way too hard to attempt to take in water without choking to death. Plus, that few seconds of rest would feel amazing.

There was one stretch where the pavement felt incredibly slick and it was a little wonky. I won't lie, a few curse words were tossed out. Luckily, there really wasn't anyone close by to hear me. There were several guys ahead of me and a few behind that I had passed. I saw no women anywhere, but I knew for certain there were 2 ahead ... way ahead.

Around the 6 mile mark, there was a photographer. He told me I was the 2nd female to come through.  Again, I knew there were at least 2 ahead, but man that thought was awesome. Me? The 3rd female? That idea kept me motivated despite the fact that my breathing was becoming very labored, very shallow. Too shallow. The wind had kicked up around the lake area as well. So, while there weren't hills, there was the wind to contend with. So the breathing combined with the wind was starting to make me dig into my head way too much.

Around mile 8, there had been a guy running next to me and I finally said, "It's kind of lonely out here, huh?" He apologized for not having spoken, but I assured him I understood. It had taken me nearly a mile to get the air to even say that much to him.

I passed up that next aid station and regretted it by the time I hit the 9.5 mile station. They only had gatorade. I NEEDED water. Needed it is an understatement. I had kind of stupidly decided to try out the Salted Caramel GU during the race. I was looking so forward to that treat. But, it had caffeine. I never have caffeine during a run. Big mistake. I got really dizzy and jittery.

Water was all that was on my mind. Sadly, we were running next to a lake in the fog. A little ironic I suppose. By mile 10 I was simply willing my legs to keep moving. My breathing was way too shallow. My pace kept going up and down, very sporadic, very labored. I wanted to quit, plain and simple.

When I came up to the last aid station, it was like an oasis in the desert. Water. Yes, finally, and not a moment too soon. I really think I would have passed out had I not gotten water. I stopped again, not even trying to trot through the aid station. A total. complete. stop. Water. 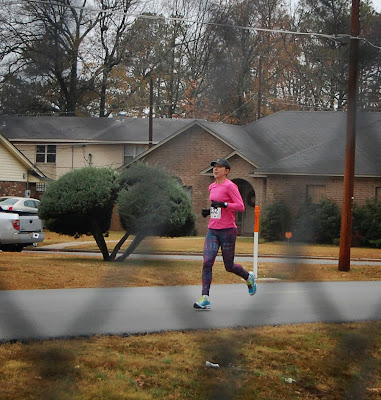 Jason got this picture just after the 12 mile mark. I was hurting bad. Not so much legs and muscles, but lungs and brain. I was all up in my head. I was making a million concessions with myself. I could totally slow down and still come in around my last race time. But I was almost there. Almost done. Another PR in my fingers.

I rounded the corner back into the parking lot where the race began and I noticed a girl behind me. What? Where'd she come from? I passed her around mile 2. This was the last bit of fire I had in me. To beat her. There was already a 61 year old man who was going to beat me, she was not. 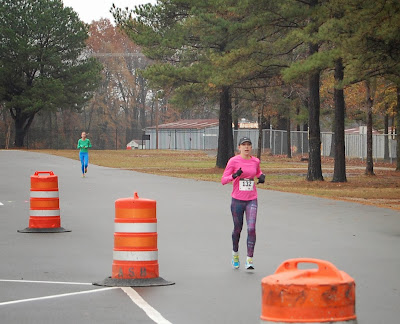 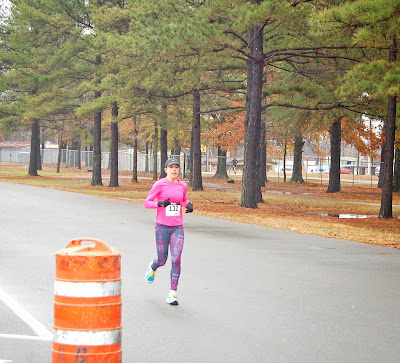 Jason was taking pictures and trying to cheer for me, trying to give me that last boost. He noticed right away I was struggling though, even asked if I was ok. Nope, just shook my head no. But I couldn't stop. Not yet. We had to go around the back side of the stadium. It was such a horrible tease to be behind the stadium, to not see the finish, to not know exactly how much farther you really had.

I needed to be done. Desperately. After coming out around the back of the building, there were two girls cheering me on. They were shouting "1:38, 1:39 GO GO GO!" I swear I felt like my legs were flying, I was flying. Jason said I really wasn't LOL, but man I felt like I was. 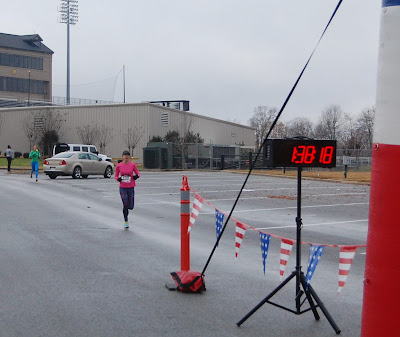 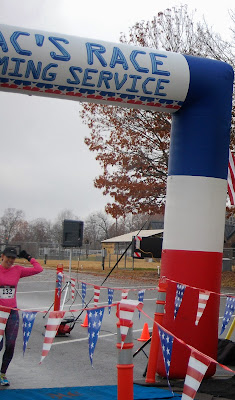 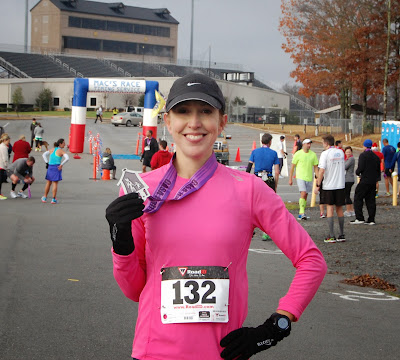 So there you have it, another PR. It wasn't easy. I truly had to dig deep for this one. This race should have been easier because it was flat. Yet, it was so much harder for me, mostly mentally. The thing is, I'm always amazed at what I really can accomplish despite the pain, despite the intense desire to give up. It truly is amazing what you can do when you refuse to quit.

One year later, I ran my fastest half marathon.