By Unknown December 02, 2013
I hope everyone had a wonderful Thanksgiving (if you're in the US) and a wonderful weekend. Thursday morning, Jason and I decided to do a last minute Turkey Trot - the GO!BBLER Turkey Trot. This is a completely unofficial, fun run/walk that's put on by my favorite, local running store, GO! Running.

I've always avoided this run because of the course. They have 3 different distances, 2 of which hit up trails. I've never run trails. I'm a klutz. So it's always intimated me. This year, Amy and her boyfriend were running it. And, for me, it's been a year of new things. Like actually recovering from a blood clot, doing a 10K, major PRs. So, I thought I would go out on a limb and try this one out.

There are no race fees. You are simply asked to bring canned goods to donate. So it's for a good cause as well. It was a super chilly morning with temps hovering in the low 20s, but the sun was out thankfully. The number of participants was shocking to me - estimated 800. The start was crazy slow, almost walking. But it was a fun run/walk, so that was ok.

Amy and I started edging our way up and around people. We ended up leaving Jason and her BF. They were doing the 4 mile route and we were doing 6.5 so it was ok that we separated. The first part of the course was flat, then we had some bleachers as we entered a high school stadium to circle a track.

After the track we headed back to the streets and that's where the hills started. I knew it was going to be hilly, but I was still totally unprepared for exactly how hilly. After we hit the second hill, lots of people started walking. At one point I actually said to Amy that we were basically walking up the hill only pretending to run.

Then we hit our first trail. Time to slow down. Oddly enough, this is where I finally started to warm up. It was a really pretty trail, but hard to pay much attention to the surroundings. I was too focused on not tripping over rocks, stumps, roots, leaves. I was utterly relieved when we hit the streets again, almost welcoming the hills ... almost.

Then we hit the trails again. This time it was a trail going up. Up and up and more up. I do wish that I had brought my camera along with me. There really were some great views, and not just of the ground that I was staring down at.

Once again, I was thankful to see pavement after we exited the last of the trails. The last 1.5 miles were pretty uneventful. We were just ready to be done. I've never heard Amy so quiet during a run, it was that tough. And I think we were both a little surprised about how tough the course ended up being for us. 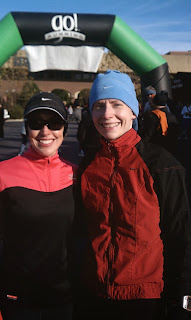 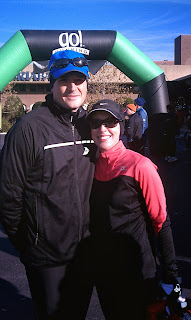 Jason and I got home, cleaned up and headed out to our home town for Thanksgiving at his parent's house. My sister ended up coming out with her kiddos, which was a great time for them. My nephew and one of Jason's nephews got to play football together. Lots of fun for them.

Friday, I opted out of any Black Friday events. I just can't deal with that craziness. Amy and I went out for a 12-mile run instead. That's way less crazy right? I think we were both shocked at how fatigued our legs were from the Turkey Trot run. We meandered through our neighborhood, complaining about cold, wind, and tired legs. But we toughed it out and got it done.

My sis came up to stay the night. Jason wanted to watch the Razorbacks play, so we all went to Dugan's for a late lunch and to watch the last game of the season. Well, Jason watched, Sarah and I talked.

The rest of the evening was pretty low key, well, sort of. I made chili and Sarah and I did decide to make a Caramel Pumpkin Martini (or 2). Let's just say the music got loud and so did we. Jason went upstairs and hid (aka read a book).

There really was no measuring. Just add in as much or little of each ingredient into a blender and blend away. Then transfer to a martini shaker and shake shake shake so it's ice cold. 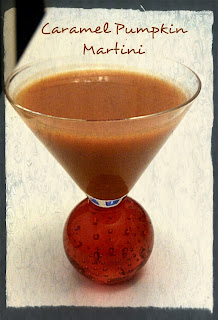 Let's just say this drink could be fairly dangerous.

Because this is already a long, wordy recap, I will share Sunday later. It involves a review of the new Mizuno Wave Rider 17.