By Unknown December 10, 2013
You're probably shocked to see a Tasty Tuesday post. I admit that it's been a while. I do have one other recipe that I need to re-make and share, hopefully sooner than later.

It's getting close to time to hit up the grocery store. What's funny is that I've noticed I tend to get more creative when I have fewer ingredients.

We're getting low mostly on the fresh veggies. I knew I had a few things that needed to be used, like an opened can of pumpkin puree. I decided to attempt creativity with a Pumpkin Alfredo sauce to go with spaghetti squash and some homemade ciabatta I had on hand.

I didn't have any coconut milk, but knew that almond milk would work perfectly. Since I was out of vegetable stock, I decided to infuse additional flavor with white wine.

Directions:
In a large, non-stick skillet, saute onion and garlic in small drizzle of olive oil for approximately 5 minutes. Add in almond milk, pumpkin puree, wine and whisk until combined. Stir in nutritional yeast flakes and spices. Simmer on low, stirring frequently, until warmed through.

Serve over pasta of choice or spaghetti squash. 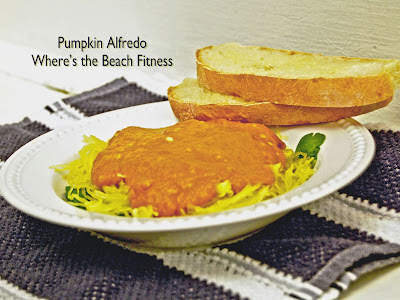 Top with whatever protein you prefer like seitan strips, tempeh, baked tofu even roasted chickpeas would be great. I ended up going with Quorn patties.

The flavors are fairly mild for this sauce. I think it would work really well as a baked dish topped with Daiya. As you can see from the picture, I did add in some fresh spinach to my dish. So that would work well in a baked version as well.

Because it is a mild sauce, I think there are many different options for how you could use it. Sometimes it's nice to have a sauce that's a bit more versatile.

When are you most creative in the kitchen?