Sick? When to Call it Quits 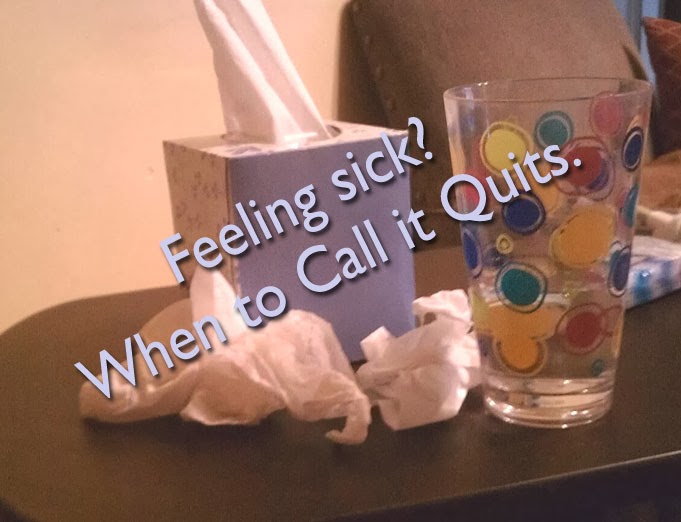 I would love to be sharing my workouts with you. Would love to tell you I was a badass and ran with Amy when it was 10 degrees yesterday, or that I got in a kick butt weight workout on Monday. But, whatever sickness has taken over has totally sidelined me.

There are many times when I am feeling less than stellar but am still able to get in a workout. I tend to try to listen to my body and do what I can. As a lifelong asthmatic, I know that if it's in my chest, then working out is a no go plain and simple. But sniffles and sneezing just mean that I need extra tissues.

It's been a really long time since I've been too sick to even think about working out. There are times when I feel under the weather and think about it, but then decide on a rest day. This time? Not even an inkling of a thought. I hardly even have the energy to move off the couch to go get water let alone run even half a mile.

To add to my list of when not to workout is a fever. The fever knocked me out for the count. I slept more hours than I was even awake, though the sleep was fitful at best.

I know many of us push ourselves hard. We push during our workouts. We push to go farther, faster. We push to lift heavier. We crave the challenge and discipline. But sometimes it takes discipline (and smarts) to know when to back off. When to throw in the towel and let the body rest.

Many of us say that we listen to our bodies. We back off when our bodies tell us to. But do we really? I  will readily admit that I likely do not listen as closely as I proclaim. Oh, I listen. I hear it. But sometimes I tell it to please quieten down a bit. I'll get back to you in a minute, after I'm done working out. Sometimes I back down on intensity, but don't fully rest. But in comparison ... it feels like rest. Perspective right?

After doing some reading, here's what I found about working out when sick. Basically, listen to your body. But really and truly listen. Don't tell it to hush. Also suggested is the neck test. If it's above the neck (sneezing, sore throat, runny nose) then it's probably ok to work out. Below the neck is a no go as well as a fever.

In fact, a "fever is the limiting factor, says Lewis G. Maharam, MD, a New York City-based sports medicine expert. 'The danger is exercising and raising your body temperature internally if you already have a fever, because that can make you even sicker,' he tells WebMD. If you have a fever greater than 101 degrees Fahrenheit, sit this one out."

Yikes. Did you know that? I never thought of that. I just know that when I had a fever these past few days, I was too achy and too fatigued to move.

What's your limiting factor for working out when you're sick? Do you really and truly listen to your body or do you tell it to hush up so you can push on?

Today I am finally feeling mostly human. Thoughts of possible workouts are creeping in my head. The weather is iffy for rain, probably a good thing because that'll keep me from running. So now I'm thinking of ways to ease slowly into workouts. Low intensity. Low impact. Short on time. I know my body will feel weaker. But getting moving again will also make me feel better. My mantra this week will be "easy does it."