By Unknown February 17, 2014
Have you ever let a bad situation start to define that particular situation for you? We don't let a bad day define all of our days ahead, but sometimes it's easy to let that happen with workouts. Thankfully my weekend, as a whole, was nice. Not rushed, simply enjoyed. And I didn't let a bad run set me up for failure for the next run.

Luckily, the weekend started off on the right foot. Friday, Jason and I didn't really have any special Valentine's Day plans. We did have lunch together, something we rarely do during the week. It was a nice way to break up the day. We went to our typical Happy Hour spot and just sat back and relaxed for about an hour. On our way out, we realized that the market next door (owned by the same people) was having a little wine tasting (and beer and whiskey).

We decided to stop in and check it out. They also had some locally made hummus on hand to try out, which was fantastic. I tried a white wine, the others were reds that I don't particularly care for. They also had a Stella Artois Cidre on hand that is fantastic. I'm not a huge cider fan because they can often be sweet, but this one was not at all.

Saturday morning's forecast had originally been closer to 40 degrees. I was excited to possibly wear shorts for my long run. Well, when I got up at 7, the temperature on the house thermometer said 26. I almost had a meltdown to be honest. I was so very much looking forward to warmer temps.

I wasn't planning on starting my run until around 9 or 10 though, so I hoped the temperatures would warm quickly since the sun was out at least. Sadly, that was not the case. Jason was planning to run the Little Rock Half course with our friend, so I set out on my own around 9:15. At least I didn't have to double up layers or wear my shoes with the screws to battle snow. That was a plus right?

From the very beginning, the run was a struggle. It was just one of those days I suppose. I was in a snit about the temperatures and even more of a snit when I realized how windy it was. I was carrying my water bottle too, and that annoyed me. Basically I woke up on the wrong side of the bed.

I decided to go a different route that took me over the river into North Little Rock down the river trail (it's all paved). I felt like I was running in place, but my pace was steady at 8:24. I really had intentions of running slower, so I tried to slow myself down but somehow found myself pushing harder. I was heading west with the wind at my back, so I started to get hot, and annoyed.

I finally stopped at 7.82 miles to try to regroup and collect myself, and remove my sweaty gloves. Then my Garmin started going crazy on me. Lost satellites, trying to find, low battery, shutting down, turning on again, finding satellites. Ugh. And of course this was a different route, so I didn't really know the way back to get me to 12 miles. I was done pretending I would get in 13. Heck, I wanted to just be done right then. But if I was at 8 then I was going to finish the darn run I had started.

I ended up downloading the MapMyRun app for my phone. I had no way of turning it on or off if and when I had to stop for traffic, I was basically just using it to tell me miles, when I could actually hear it. I was heading back east and the wind was brutal, and cold, and I was convinced my fingers were frostbitten so I had to stop (again) to put back on my sweaty gloves. This was not helping my mental state. And I know I kept speeding up when I really needed to slow down.

In the end, I hit 12.2 miles and was beyond ready to be done with that run. In fact, as I sat in the floor stretching, I almost started crying because I was so annoyed at how bad the run was. The positive? At least it was sunny!

Sunday the weather was much warmer, the winds a bit calmer. Amy and I ended up going out for a run at 10 and it was an awesome redemption run. Everything just clicked. Funny thing, Amy had a super crappy 12-miler Saturday as well. Something in the air? At least it wasn't in the air Sunday. I ended up with 7 miles and felt like I could have easily gone on for another 3 miles. Love that feeling.
I'm glad that I've grown as a runner though. When I first started running, I would let a bad run start to define running period. One bad day could easily lead to several bad days of running as I convinced myself that I couldn't do it, that it was my fault, too hard. I just knew that the next run was going to be as bad if not worse. It was a downward spiral of thinking.

Now I've learned that running is just like each new day, you never really know what to expect. I also know that I can learn from a bad run. Usually there are some underlying reasons, like being too much in my head or not having rested enough perhaps.

I'm very thankful that I've stopped letting a bad run define running for me. Each run is a chance to start fresh. Sunday's run definitely proved that and left me smiling for the rest of the day. Another thing that made me smile was seeing the first blooms. While the weather has been far colder than normal, apparently it hasn't affected the flowers. They're ready for spring as well! 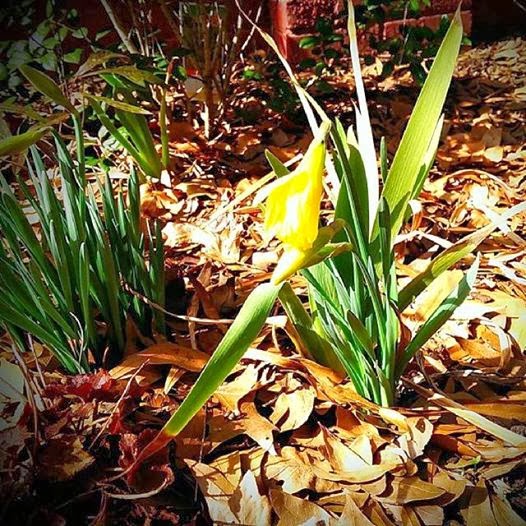 Are flowers blooming where you're at just yet? And how do you shake off a bad workout?