By Unknown February 10, 2014
Friday, there was snow in the forecast. Kind of funny since my Fun for Friday post was all about winter in the south. Schools actually closed at 1:15 despite the fact that it was dry. Cold, but dry and the possible wintry weather wasn't supposed to even hit until around 5 or 6.

We met up with Amy and her fiance for happy hour at 5. It was still dry, not even a flurry. Around 5:30 we started noticing a few flurries, then it got heavier. We watched as it started to stick to the streets, but it was fairly powdery, so we weren't terribly concerned. We headed home a bit after 6 as the snow started to become larger, heavier, prettier.

I continued to peek my head out the back door watching the snow slowly pile up. The forecast had originally mentioned a dusting of snow. This was the last picture I took around 8:45 as the snow was still coming down. 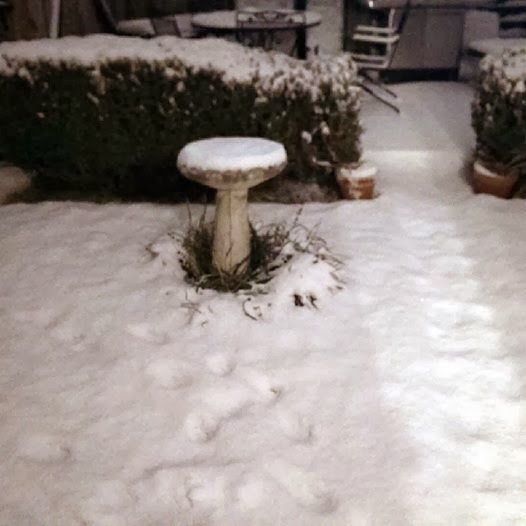 When we woke up Saturday morning, we realized that a run was probably not going to happen. I moped around, did some chores, moped some more. I kept checking the streets, hoping for some serious thawing. Originally it was supposed to have been in the mid-40s. The forecast quickly changed, however. They began to say high of 36, but they doubted it'd get that warm. Um, then why even forecast that?

Finally I decided I'd have Jason drive me over to my work gym. I wasn't thrilled, but sometimes the treadmill is necessary. And....the gym was closed. What? I almost lost it. Jason and I had been sort of joking around about the idea of screws in shoes for traction. We ended up at the local hardware store buying screws. Things were getting serious.

I pulled out an old pair of running shoes, but so did Jason. I wasn't expecting him to hop aboard my crazy train. Maybe he wasn't about to let his wife outdo him in the crazy department. I had searched the internet for ideas on how to modify shoes for running in the snow. I found one that mentioned using 5 screws for each shoe, we ended up doing 6 for each shoe and I think 7 would have been better - adding one more towards the toe. 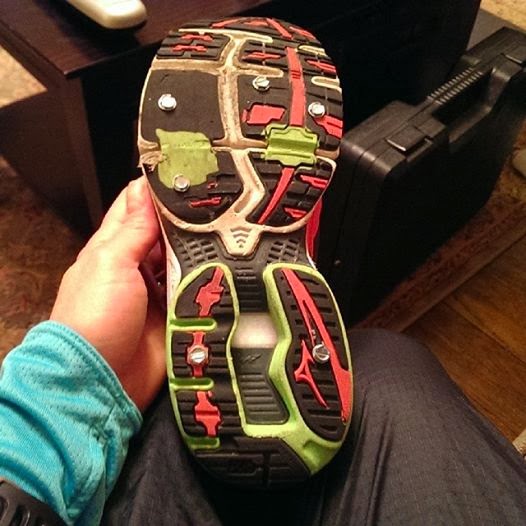 Screw in the screws with 2 near the heel and 3 along the middle portion. Again, I would have added at least one more near the toe for extra traction.

After Jason had modified our shoes, we got ourselves ready for the run. I will say that if you aren't using trail shoes or shoes meant for wet weather, wool socks are an absolute must! Even though my feet were wet, they remained warm.

I honestly wasn't sure how far we'd end up making it. We headed out and decided to go down towards the river. Our neighborhood was still fairly snow-covered, bridges snowy and slick. However, the streets were starting to melt nicely, so we tried running in the streets as much as possible.

Jason decided he wanted to go up to the Clinton bridge. That was a little slick - Scooby Doo legs here and there. I must mention that we did see another runner, so we weren't the only crazies out. And when we got to the top of the bridge, there was a man walking who stopped and talked with us as we were taking pictures. He was asking about running in the snow because he was thinking about going home and getting geared up himself 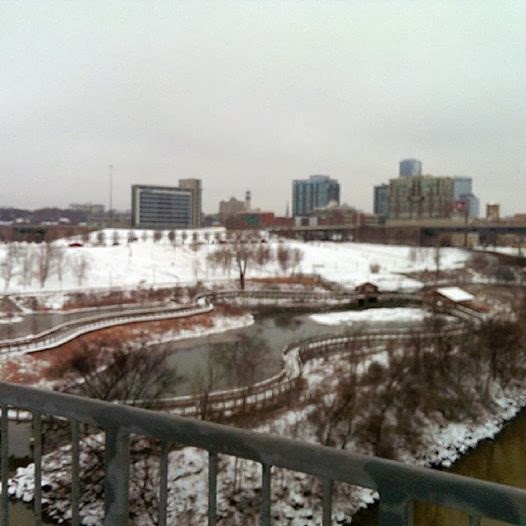 After all was said and done, we ended up with 8 miles. They weren't fast. But they were peaceful. 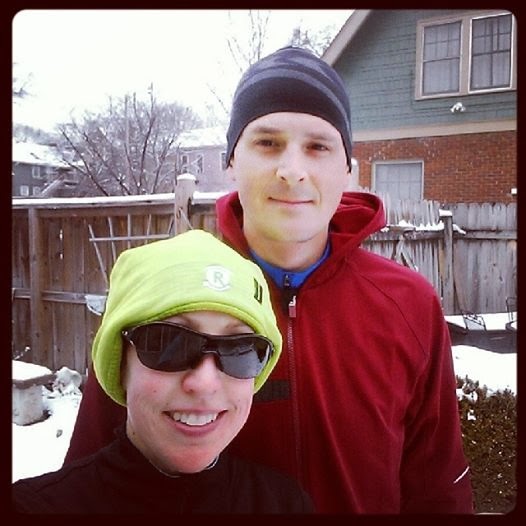 Have you ever modified shoes for a run? Running in the snow - yay or nay?