A Good Weekend for Running & Time with Friends

By Unknown March 10, 2014
Once again, Monday rolled around way too quickly for my liking. The time change certainly didn't help with that. While I love the extra daylight in the evenings, I'm really not thrilled that it's still dark at 7 am again.

Saturday morning started out with a great 10-mile run with Amy. The weather was just about perfect. Not too hot, not too windy, with gorgeous blue skies. We meandered over to the North Little Rock side of the river trail enjoying the water views of the river. We laughed and joked our way through the 10 miles so the run went by quickly. 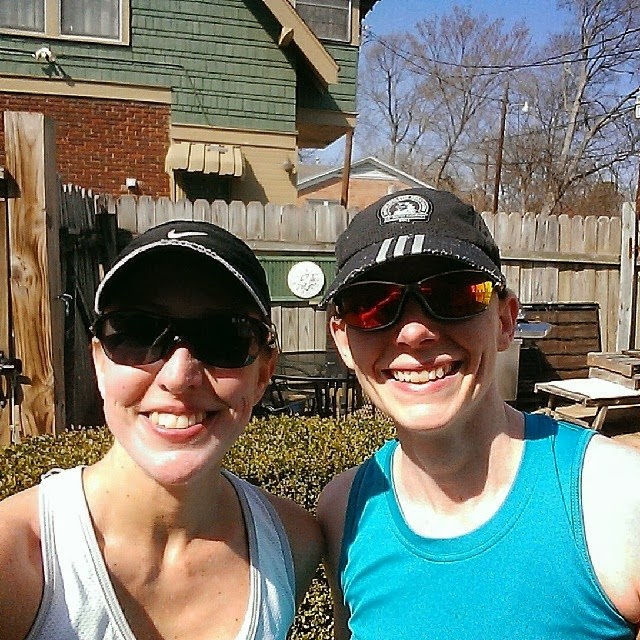 After spending a little time on my Triggerpoint Therapy kit and stretching, I decided I wanted to do a bit of yard work. I started off weeding in the back yard and pulling out all the dead plants from the garden. Then I got a little over zealous and decided I needed to rake the front yard.

It's not a large front yard by any means. We only have one very large, very old tree. However, it's a Pin Oak. The leaves are narrow and difficult to rake up. I completely underestimated the time and effort of this little task.

10 bags of leaves later, I finally decided I had to get myself cleaned up. Jason and I decided to have a late lunch at Dugan's patio before meeting up with friends for an outside festival event that benefited a school downtown.

We had ordered nachos to split, loaded with tomatoes and lettuce and I brought along TVP for mine. But the plate was really small and very underwhelming. Of course, that's probably a good thing as nachos aren't exactly a healthy lunch no matter how many veggies we asked for. I don't always eat the way I should either.

The festival had food trucks, one of which had a vegan BBQ sandwich. Since our lunch had been less than stellar, Jason ordered the sandwich for us to try out. It was crazy messy, but really quite good. It was loaded with Brussels sprouts, mushrooms and cabbage with a Korean BBQ sauce. 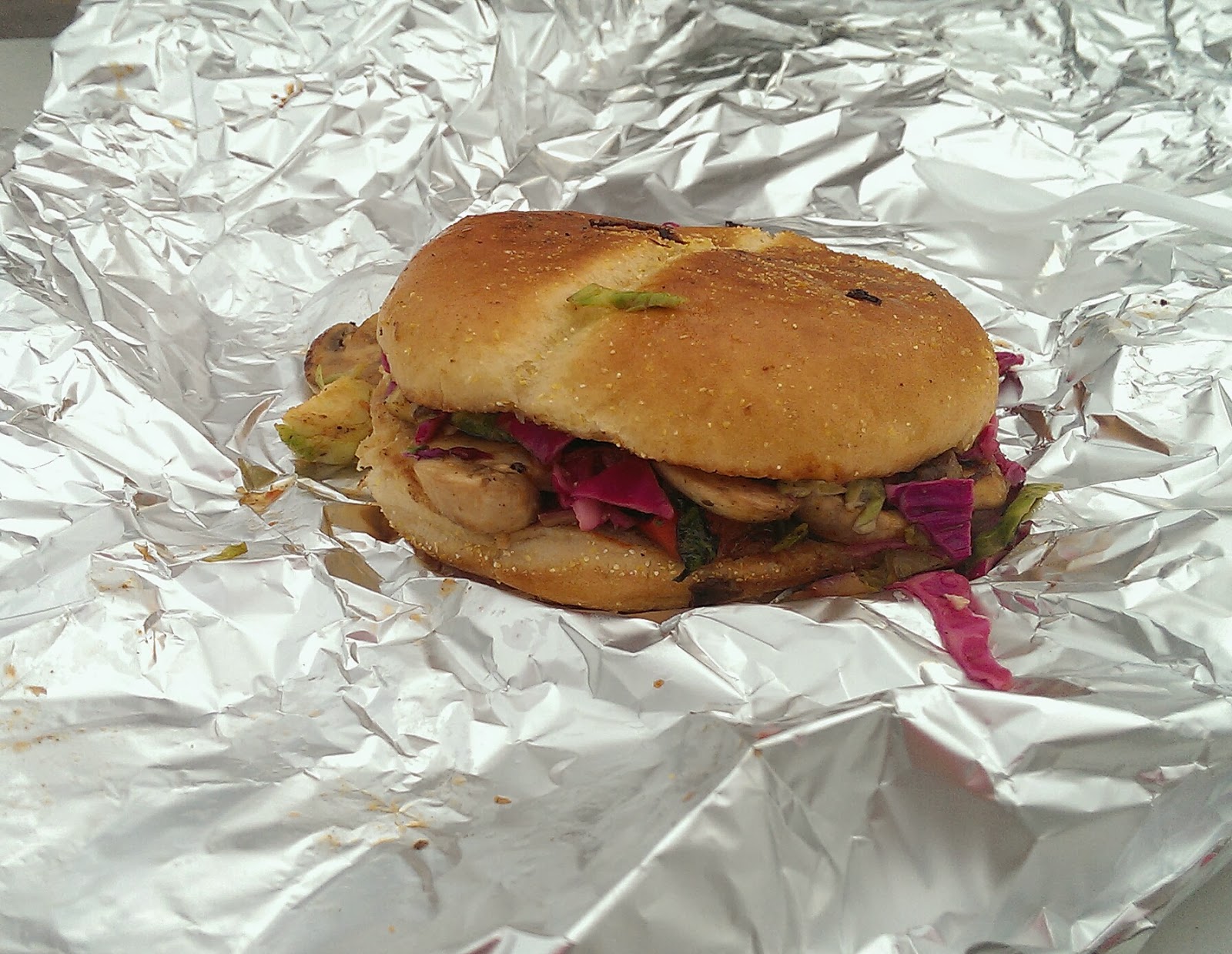 Unfortunately, the skies started to cloud over so it became just a bit chilly out. But we had a nice time nonetheless. We ended up going over to our friends' house to try to enjoy their patio, but then light rain forced us indoors. 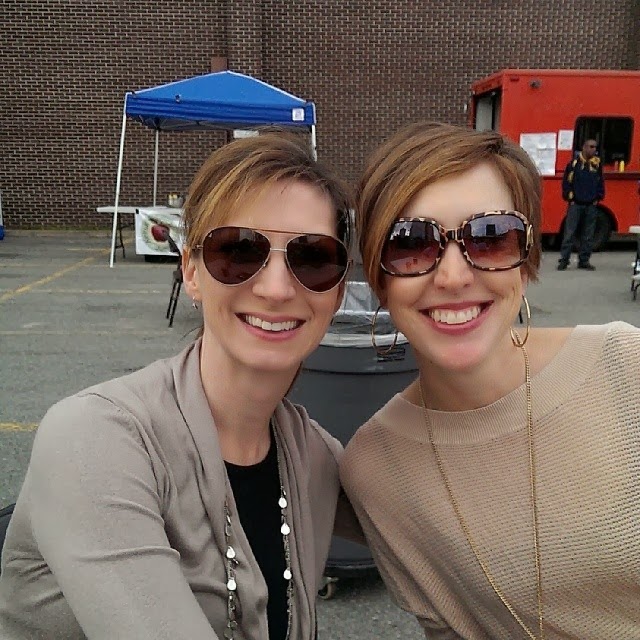 Because of the time change, Sunday started off behind. It's never fun to already be an hour behind on everything the minute you wake up. I had gotten quite a bit of my chores taken care of Saturday, this mean Sunday I could be more leisurely.

Jason and I headed out around 11:30 for a 6-mile run. It started off feeling really difficult. We were taking it slow and easy, but the humidity was high. It was much cooler than Saturday, and really damp feeling. We weren't saying much and at mile 2 I mentioned that I couldn't believe it was only 2 miles. He agreed with that statement.

Eventually we found a good groove. He stopped at 6.3 miles and I went on to finish out at 7 since I had finally found my happy running pace. It only took about 3 miles in, but at least it did happen! 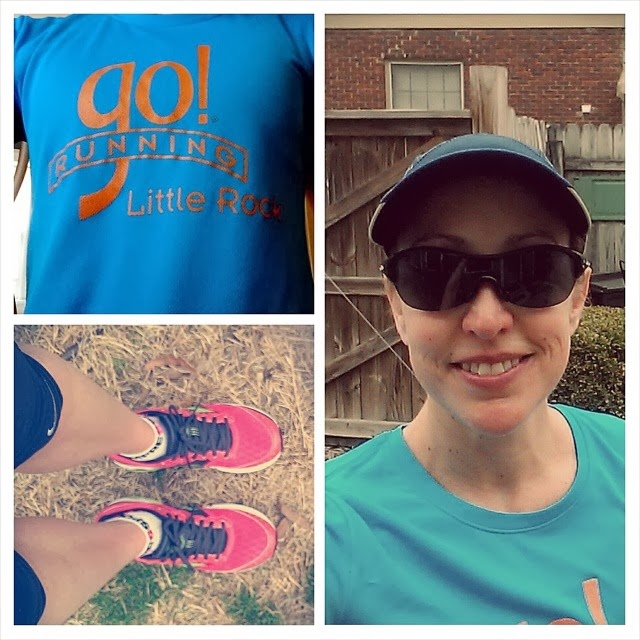 The rest of the day was low-key. I did massive amounts of laundry that all now needs to be put away. But at least it's clean finally. We ended up watching Catching Fire. It was so much better than The Hunger Games in my opinion. Still doesn't hold up to the books, of course, most movies rarely do though.

Nachos, yay or nay? Did you read the Hunger Games books?