It's Raining, It's Pouring .. I'm Running

By Unknown May 29, 2014
Do you  ever have those moments when you think, "I must be flat out crazy."? This morning was one of those moments. I had planned on running 6-7 miles. I watched the weather, I'm a runner and that's what we do after all right? The forecast was for 30% chance of rain around the time I was planning on heading out.

When I got out of bed, however, it was pouring. Not just a little bit of rain, but absolute downpour. I decided to go check the radar in hopes that it would be passing quickly. But it was coming down in buckets and the radar wasn't showing me what I wanted to see.

I decided I'd just get on the bike trainer, reluctantly of course as this was not my plan. I ran out of free Amazon Prime episodes of Parenthood and started trying to watch Friday Night LIghts. Totally not doing the job for distracting me by the way. So, changed into bike shorts, my cycling shoes and tried to pull up the show. Annnddddd cue internet outage.

There was no Plan C. It was too late to try to go back to bed. I was quite miffed to say the least. How dare the rain ruin my running plans like this. I decided to do what any insane runner would do, head out for a run.

There was no avoiding puddles and wet feet. I hit a puddle almost immediately. Squish, squish, squish goes my shoes. I had to giggle at myself honestly. I would have taken pictures of the water gushing out of rain spouts if it wouldn't have ruined my phone.

I had a route sort of in my head. I thought if I went one particular direction, the puddling in the roads wouldn't be as bad. I was very wrong about that plan. Splash splash splash. My watched buzzed at mile 1, I glanced down and noticed that the face had gone gray. There was nothing displayed. Uh oh.

I was ok not knowing my pace, however, I think I was running too fast, sort of willy nilly because I was clueless. The other problem with not being able to actually see the miles was knowing which way to go so I wasn't too far from the house OR too close to where I would have to keep circling the block or something silly waiting impatiently for it to buzz.

Luckily, I am more than familiar with various routes and had a vague idea of distances. But that meant I had to be mentally paying attention to where I was, how many blocks I had gone or had left to go to get to a particular point. I guess that helped distract me from the sudden chafing thanks so soaked shorts. Oh, and singing, "It's raining, it's pouring, the old man is snoring ... " for about 2 miles also distracted me, and made me laugh at myself. I'm sure I looked like a total lunatic running, grinning, laughing, singing ... in the rain. 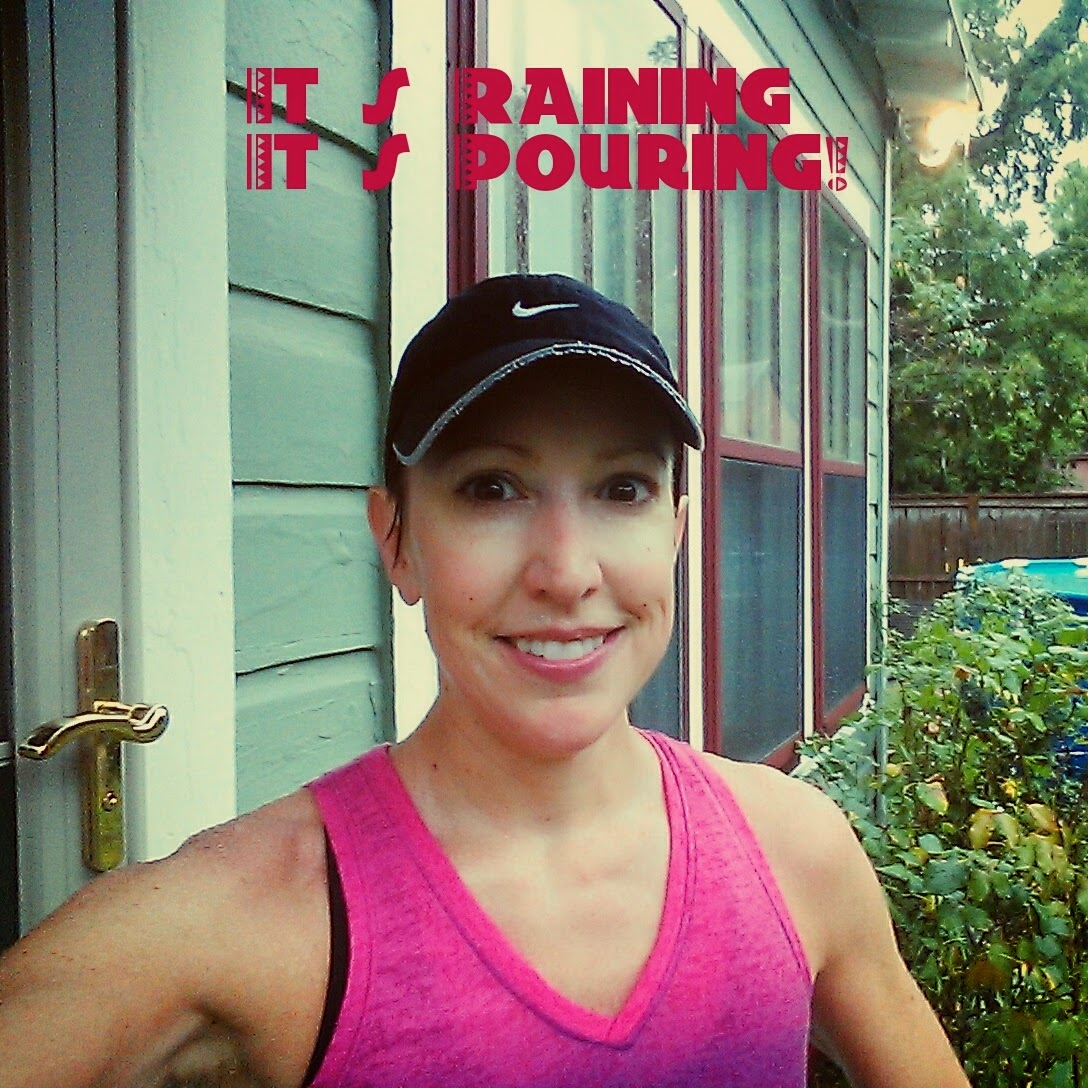 On the upside, I never got hot today. Stubborn, crazy? I'll let you make the call.