By Unknown September 03, 2014
I won't even begin to lament on how hard it is to get back to reality after a vacation. Everyone knows that feeling. It's even harder when you had an amazing, whirlwind of a trip. I feel like it just flew by in a blur upon reflection. Of course, at the time, we were fully immersed in just enjoying.

Thursday morning we were up super early for a 6:45 am flight to Boston. The upside of an early flight is that you have most of the day to still enjoy your destination. We landed in Boston just after 1 and were checked into the hotel by 2. The trip involved staying Boston Thursday night, sightseeing most of Friday, then moving on to our friends' house in Peabody for the remainder of the trip.

We ended up staying at the Copely Square Hotel, which was a wonderful choice for us. They were very accommodating as well by letting us check in early and also holding our luggage on Friday after we had to check out.

During the day, they have an area with lemonade and flavored water set out for guests, in the morning it's coffee and tea. For the evenings, they host a Wine Down gathering where you can get complimentary wine while relaxing in their comfy lobby area. The best part was that the wine was actually very good ;-)

The room was smallish and cozy, but that was fine as we weren't planning to spend our time in the room. The bed was comfy and that's what usually matters most. It was a tad noisy. But I've found that older hotels can be that way. And while it was an older building, it was nicely redone.

The best part was the location. It was fairly central to anything we were planning to do. Plenty of food choices, easy walk to parks or the Charles River. We even hoofed it to Fenway Park with relative ease as well as the Freedom Trail.

On Fridays, we learned, there is a Farmers' Market set up in Copely Square. While we couldn't load up on fresh veggies necessarily, we did grab some tasty sandwiches and a picnic cheese spread that included herbed goat cheese, fresh bread and homemade trail mix, which we enjoyed in a shady park, people watching. 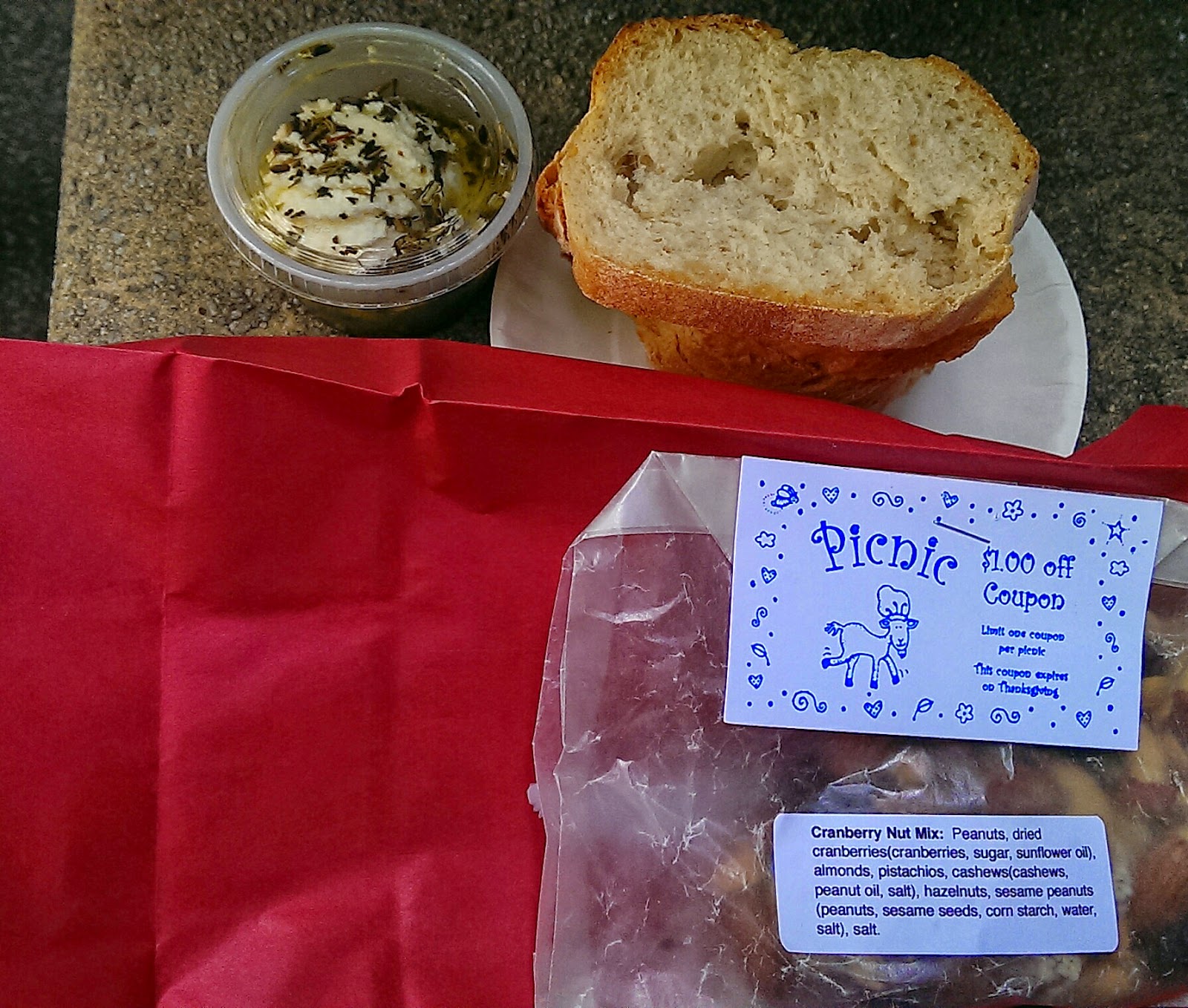 But, I'm getting ahead of myself.

We immediately headed out to find a place to eat as we were starving having basically missed lunch because we had to re-check into La Guardia after taking a bus to a separate terminal. That was fun and efficient ... not. We did see Bill Murray so that has to count for something I suppose.

The weather was absolutely amazing. It was sunny, low humidity, hovering around 70 degrees, perfect patio weather basically. It felt like fall and we were in heaven. After passing by a few restaurants, we settled on Trattoria Newbury . We started with their eggplant rollatini, which was absolutely amazing. I went with the Mediterranean salad and Jason had a sandwich. Everything was fantastic, including the atmosphere. 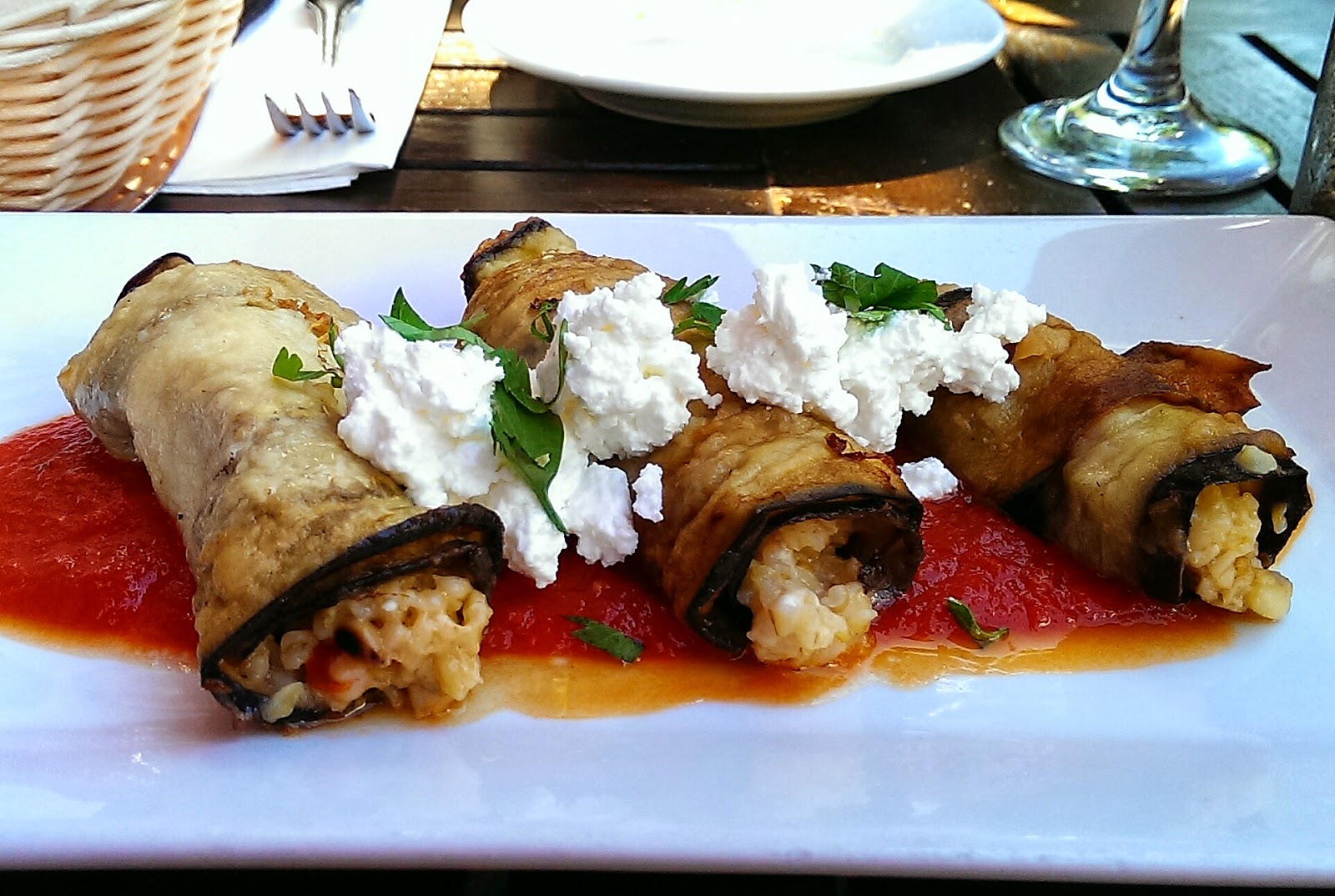 After eating, we both felt much better and continued on walking around Newbury then made our way towards Fenway Park. Unfortunately there were no games, but Jason really wanted to do the tour, which I actually will recommend surprisingly enough. We had some time to kill before our tour started so we walked across the street to Boston Beer Works. 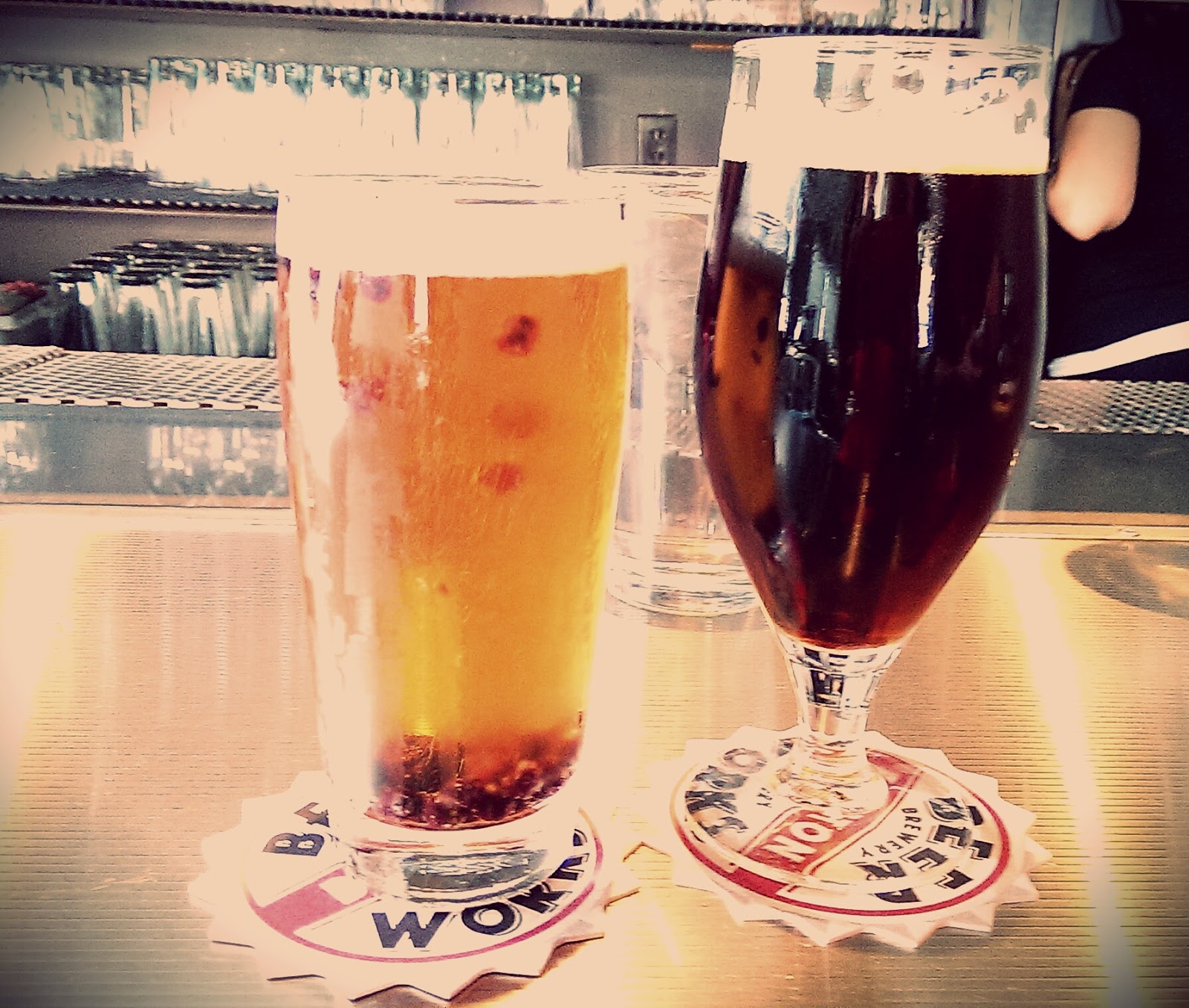 I chose a Blueberry beer (can't remember name and they've already changed out their online menu) and Jason got an IPA. The blueberry beer was amazing. It wasn't overly sweet, just a nice, mild blueberry undertone. They actually dropped in some fresh blueberries when serving the beer. Jason was impressed with his beer as well, though I didn't try it out.

For dinner we walked over to Papa Razzi Trattoria as it was recommended and also close to the hotel. There was a Boston dine out happening so Jason chose from their 3-course menu. They had a fantastic sounding bruschetta, so I ordered that from the regular menu along with their Insalata di Campo (baby greens, dried cranberries, tomatoes, Gorgonzola, balsamic vinaigrette). Again, everything was simply

perfect, including the Peach Napoleon with a lavender honey drizzle.

My good friend Jessica's husband picked us up Friday afternoon and we headed to Peabody (I've lost count of how many cities we ended up in). We made homemade pizzas for dinner. I vote for Pizza Party Fridays from here on out by the way. I'll talk more about the fun had that night, but sticking with food for now so the post doesn't become a novel (too late right?).

Saturday we had a late lunch on the water in Salem at a wonderful spot called Finz Seafood and Grill. We didn't get any pictures of the food, but we did take some of ourselves at least. 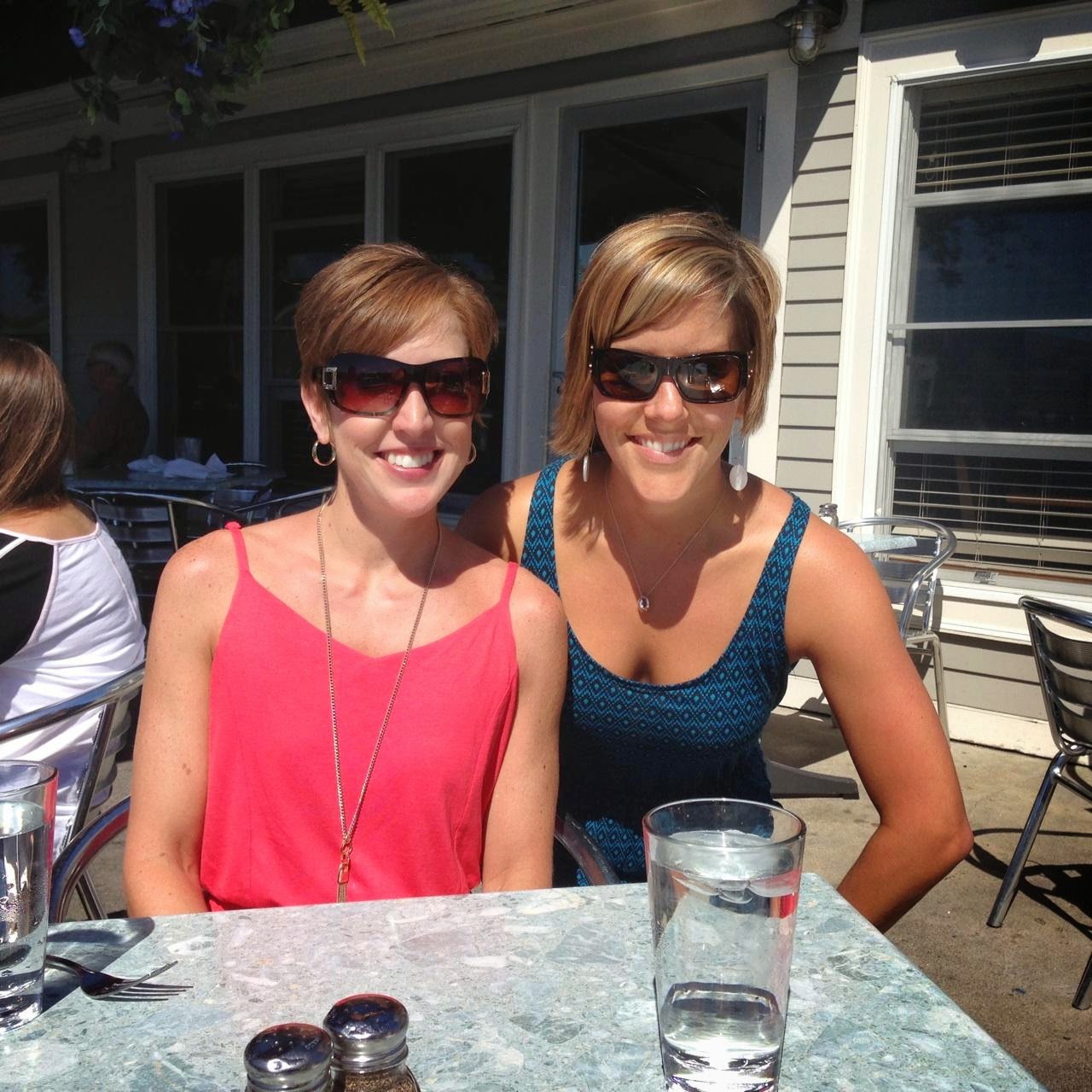 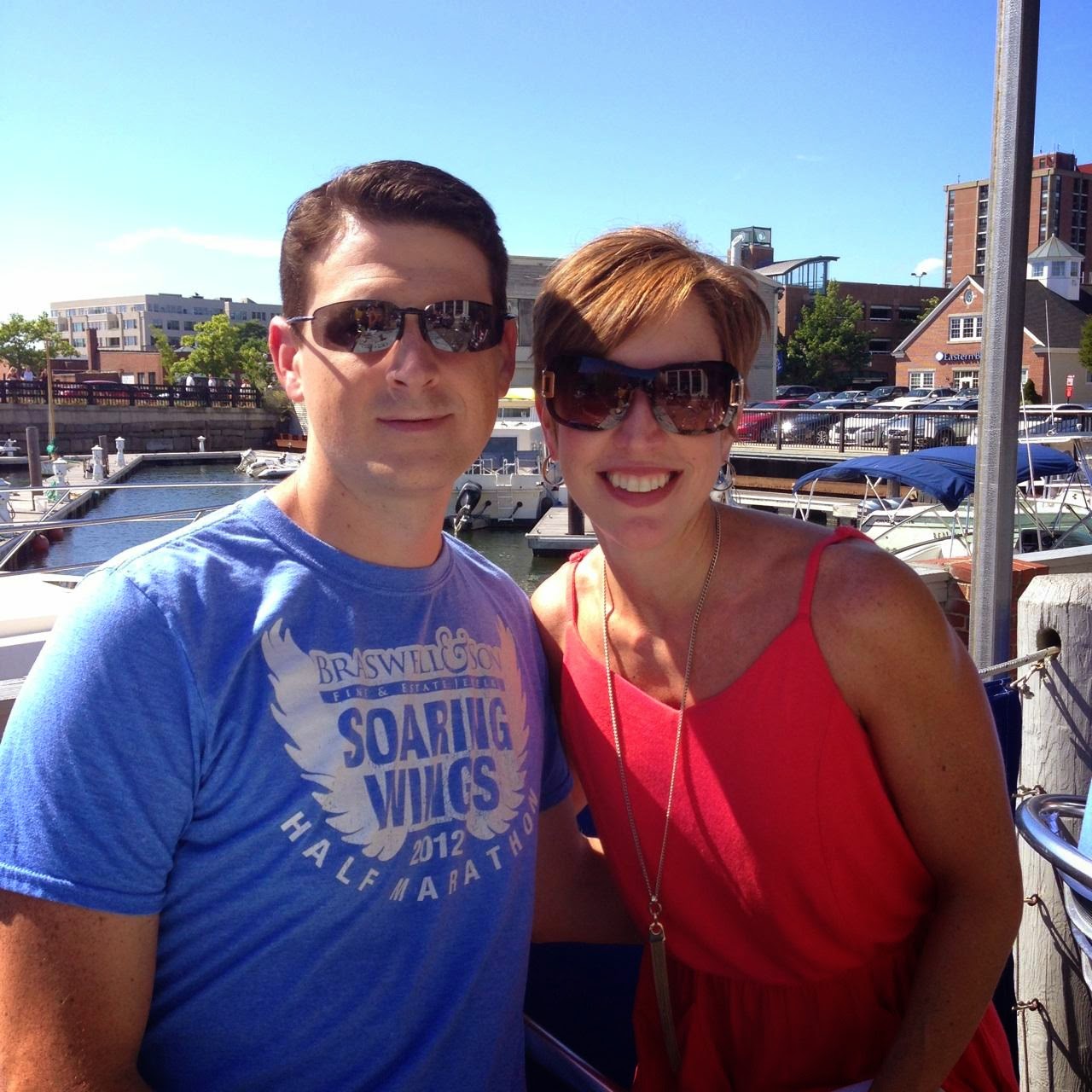 Dinner was back at Jessica and Scott's house. She put together a yummy appetizer platter while we sat and chatted and enjoyed wine before diving into dinner: burgers for the boys, veggie burger salads for the girls. Again, no pictures, just lots of fun and probably half a bag of M&Ms for dessert.

Sunday we headed to their hometown of Gloucester. We had hoped to have a beach day, but the weather was looking iffy. Of course it turned out to be wonderful, but that's ok. We still had a great time and ended up eating at another nice waterfront restaurant called Latitude 43. Dinner was back at their house. Scott, who's of Italian decent, graciously made his red sauce to share. I also made some ciabatta to contribute to the meal. Dessert was basically more wine and some various chocolates we had picked up along the way.

What was so wonderful was that we enjoyed some new restaurants and meals, but also enjoyed eating in with friends who just happen to make some awesome food.

Wow, that was longer than anticipated and I hope you made it through at least half of the post. I will have 2 more posts: The Running and The Enjoying.

Have you been to Boston? Do you prefer to eat out exclusively on vacation or a mix of making dinner in with friends (if possible)?