By Unknown December 30, 2014
Saturday morning I did something I swore I'd never do. I ran a marathon. On a complete whim, I had signed up for the Jacob Wells 3 Bridges Marathon. I won't lie, I may have had some wine that particular evening. Then I saw a Facebook update that there were only 5 spots left. I said something to Jason and he handed me my credit card. The rest? History (as they say).

I feel like I should apologize for the rambling, jumble of a recap in advance. I'm still having a hard time wrapping my head around the whole experience.

I think I should do a preface about this race, about the emotions surrounding it. Jacob Wells was the race director. He started this race last year. Sadly, he passed away unexpectedly in November during a marathon. The Arkansas running community is a very tight community. So his death was a huge loss.

I never knew Jacob personally. I had seen him at races. He was known for giving high fives and shouting out kudos. Let's just say that his spirit, his energy was there in full effect with almost every single runner out there - all holding up hands to high five, shouting out "good job" "looking good" "way to go." It was hard not to feel energized.

I've spent the past 18 or so weeks getting ready for this day. I mostly enjoyed my training, but I also was blessed to have had some amazing training partners and tons of support along the way. Honestly, it never felt like hard training. Of course, that made me start to second guess myself by taper time. Had I run long enough, fast enough, too much, too little, on and on. In the end, I had done all I could do. It was time to watch the weather and prop up my feet.

The weather forecast kept getting worse. Race day was forecast for 90% chance of rain with temps around 54 degrees. At least it wasn't freezing became my positive thought. Race start was 7 am. We had to take a trolley from a parking lot, something I've never done and that made me more nervous. The waiting.

The rain started to let up around 6 am but then come back through. But, it had been pouring so the start/end area was already a muddy mess. The potty lines long, nerves high. I did manage to get in an easy jog (no clue on distance) before the start then it was go time. No turning back. Rain or no rain, this was it. And as if on cue, as the countdown began, so did the rain. 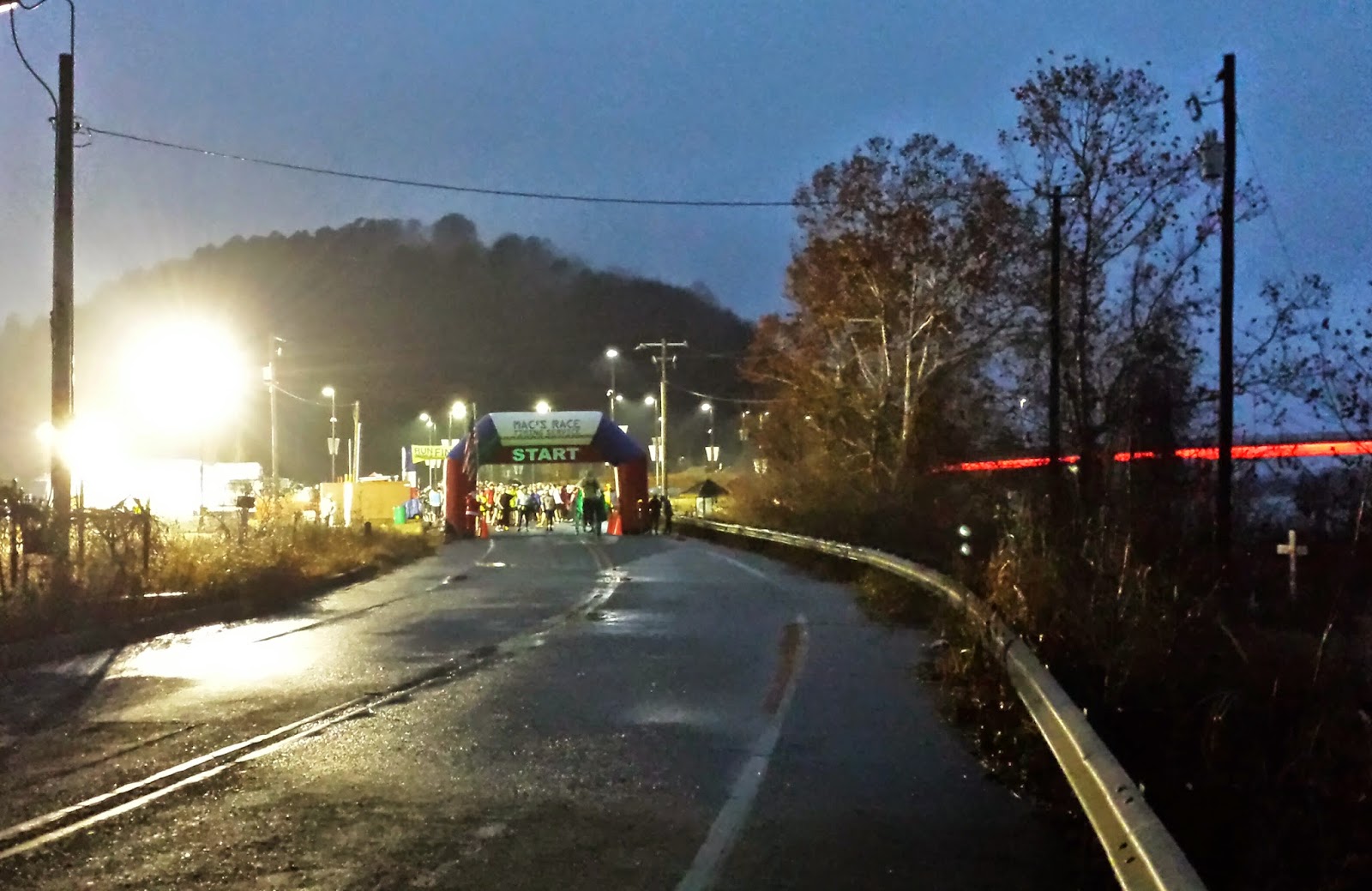 Initially my plan was to attempt negative splits starting around an 8:30 pace and hoping to increase to about an 8:15. What happened was that I ended up starting faster than intended, but it felt good so I just went with it. It's been my race "strategy" MO and it seems to work. And I actually ended up with 7:40-ish between miles 7 to 17.

The first few miles were mostly a blur. It was dark, raining, not much to write home about. I had my water bottle with me so that I could skip the aid stations and ensure that I didn't get dehydrated. I took my first gel at mile 5. Then my plan was to hand off my water bottle to Jason at around mile 9 so he could refill it and add another gel to the pocket. I was very happy to not have the bottle in hand as I crossed the 2nd bridge, one that I would cross, do a loop then immediately go back over. It's called 3 Bridges for a reason ... you have to cross, 3 bridges in an out and back. ;-)

My friend Jessica had told me that for her full she dedicated a mile to someone she loved as a way to not focus on the running. I started doing that around mile 4. I'll admit that I forgot after mile 10, which was the mile I dedicated to her. But it helped. I ran one for me dad, my grandmother, my sister and other friends and so on.

While there wasn't a lot of crowd support, the aid stations were high energy, as were the other runners. Again, so many high fives and shouts of encouragement. Though, it is a small race, so there were lots of times when I felt completely alone (as seen below).

I was still feeling really strong and had actually increased my pace from miles 7 onward. I was hovering at a 7:56 overall. In the area seen in the picture above, there were 3 very large, deep puddles that sort of forced you to run into the grass. By the return trip, the grass was nothing but sloshy mud. My feet were soaked and muddy and everything was starting to get tight.

Jason was with my dad, step-mother and sister and seeing them at several points was such a boost for me mentally. Almost no words to describe how happy I was to see their faces, hear their cheers, feel their love and pride. Of course, all that can go so far before your body starts to talk back to you.

The weather was fairly miserable. I was soaked. My feet were sloshing in my shoes. When it's that wet, you know the humidity is 100% so my breathing was a little labored. But it was mostly my muscles starting to seize up. My left foot started to randomly hurt, a sharp, shooting pain along the metatarsal area. My left hip flexor was screaming, my hamstrings tight, but I couldn't give up.

I was trying to remain positive, trying to find my happy place. I was trying to make sure I was keeping my form in check, trying to relax. Jason had called out at this point that Amy was heading my way. She had offered to run part of the race with me for support.

She arrived with her fuel belt on with NUUN (she even asked my flavor preference). I must say that NUUN never tasted so good as it did at that point. She also gladly carried my water bottle for me (and also refilled it twice), which was starting to feel like a 20 lb dumbbell of annoyance. I could tell be the smile on her face that she was proud and that meant so much.

While I couldn't really talk, I'm one who needs to dig into my head and focus, she helped me most by making sure I was taking sips of water or NUUN and getting in my last gels. This was crucial because after about mile 19, I was starting to feel nauseated and it was getting hard to even drink water let alone force down a gel. This is where you want, need major crowd support. And there wasn't any, only the aid stations. So she was my cheerleader.

Now, I'm going to admit to something that I never wanted to happen. I walked. I hit a point where I could not ... not walk. I cursed, out loud, very loudly. I was furious at myself. I apologized to Amy. But I had to do it. I hadn't slowed through any aid station and I think that was a downfall. I had to walk. I wanted to cry I was so angry with myself. But I got going again and it was the break I needed, until I had to do it again.

So there, I walked. Not once, not twice, but I think 5 times at the end. I cursed. A lot. I was so angry with myself. Somehow I felt like I was failing. The last time I had to walk I asked/told Amy to go ahead of me. I needed to cross the last bridge on my own. To dig in and get it done. I didn't speed up. That was ok. I honestly had no gas left in my tank. I think the last sprint, the last .2 miles was 7:58. What I hadn't been doing the whole run was paying attention to the time lapsed.

When I saw the time clock ... I was in utter disbelief. 3:31:xxxx It was kind of a blur. I saw my family. I heard the cheering. I had so many strangers giving my high fives as I was coming down that chute. I laughed to myself when they paused at my name and opted for the Miller part only. I was overwhelmed. And that's not even a strong enough word.

I grabbed water, the famous foil blanket and kept walking. I knew I couldn't just stop, especially with the weather, it had gotten colder, windier, and the rain was back, a steady mist of nasty. It still hadn't quite sunk in my time, my pace, none of it other than I had finished. I was emotional. And the sight of Jason and my family was never so special, so important to me. 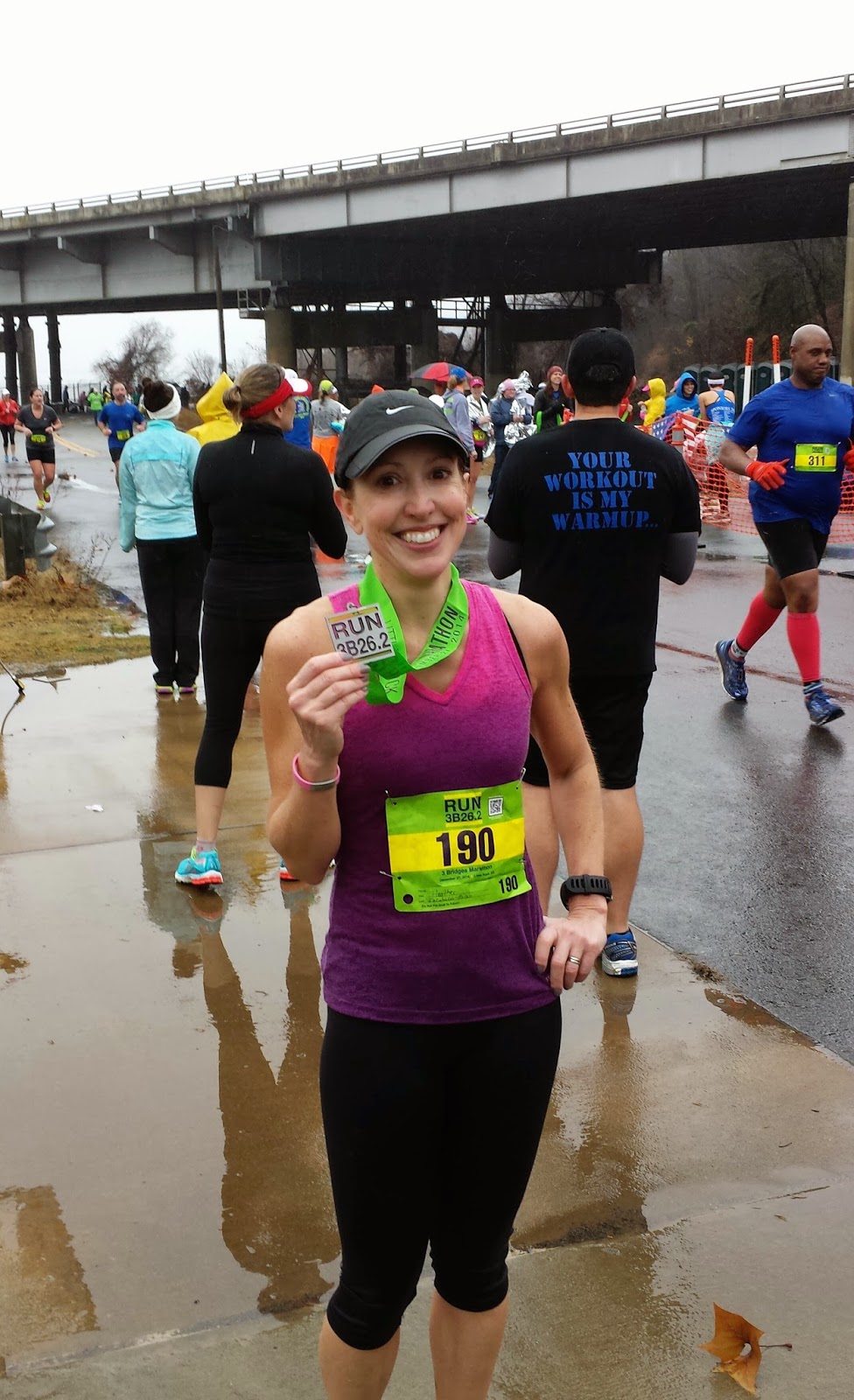 I won't bore you with the post-race details of shivering, trying to change into dry pants in a dirty port-a-potty, but in the end, I finished with a time of 3:31:26. I was the 5th overall female, 1st in the Master's Division, and 18th overall to cross the finish. 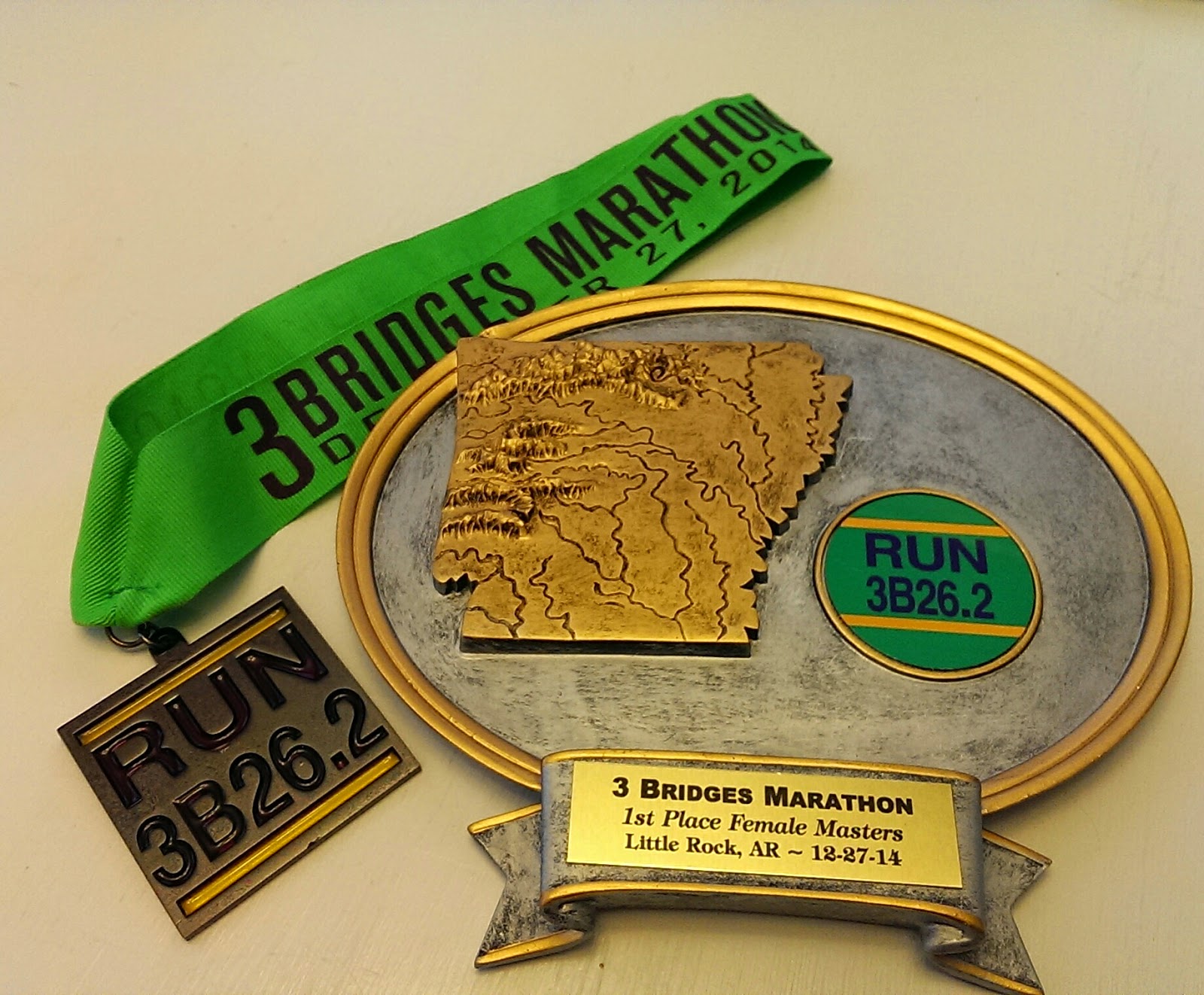