What Not to Say to an Injured Runner

By Unknown January 30, 2015
When things happen to you, like an injury that is obvious, it's kind of amazing what tends to happen. Hobbling around in a walking boot is uncomfortable enough, but I have been really surprised at the responses it/I have gotten.

Complete strangers have stopped to ask me what I did to cause my injury. I've had people just stare down at my boot like it was a third boob. I've had people try to joke around, real comedians I tell ya, others like to make comments about getting a matching boot, or that it matches my outfit.

If I tell someone that it is an overuse running injury coupled with being vitamin D deficient as well as other workouts (like plyo) then I get that knowing smug look and nod then something about how running will kill you or some such crap. As if sitting around on your rear eating ho-hos and cheetos won't. But ... I digress and won't touch that tangent today.

Along with some insanely ridiculous comments, I have gotten a fair amount of advice, suggestions, feedback from friends, relatives, strangers, and other runners.

Let me preface myself before I proceed - this is all meant in fun and humor. I am not offended by those of you who've made any of the below comments, I know they were meant from the heart. This is simply me trying to find a bit of light-heartedness right now, something I've been lacking.

But, since I've been injured, I've come up with a list of things that you should never say to an injured runner. Again, all in fun. 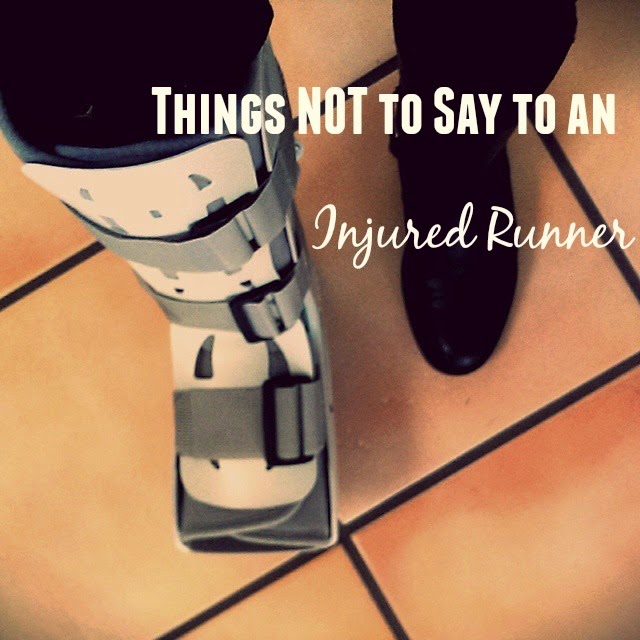 Things NOT to say to an injured runner: