June Runfessions - The It's Too Hot Edition

By Unknown June 26, 2015
Not sure what it was about this week, but it felt never-ending. Sort of like my runs have been feeling honestly. Summer has hit us fast and hard here. When you wake up and the "low" is hovering near 80 with dew points at 72 and above, you know your run is going to be bumpy at best.

Rather than moan and complain about how hard marathon training is during the summer (what the heck was I thinking by the way) I thought it'd be fun to jump on the Runfessions train this Friday courtesy of Marcia at Marcia's Health Slice (you must go read hers too). 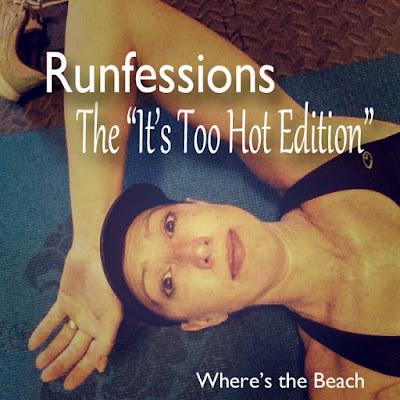 For the past 2 weeks my runs have left me feeling defeated and I'm questioning my sanity for having signed up for a fall marathon. Well, a marathon period, but fall? What on earth was I thinking?

I've been very remiss recently with stretching and rolling out after runs. Well, at all. Instead I just fall out in the floor in front of the fan wishing for winter. << Yes, I did just type that.

Wednesday was a PTSD invoking kind of run. It was a stupid run. We didn't listen to our bodies, or each other for that matter (when words "dizzy" and "urpy" are uttered, pay attention). The temperature at 5:30 am felt like 86 degrees, there was zero breeze and we over-heated, but we kept on going. I mean, when you say you're doing 9 miles, you do 9 miles right? Um, the answer folks should be NO. Lesson learned. PSA know the signs of heat exhaustion.

Thursday morning I actually told my running partner that I would gladly drink a frozen margarita if someone handed it to me at that very moment. Yes, 6 am. Oh, and I hate margaritas, but the thought of something cold would have out-weighed my sense of taste. I may have been hallucinating because I also got a little giddy at the idea of putting my head under a slushy fountain and opening that spigot up full throttle. Hello brain freeze.

Would you take a margarita at 6 am? What runfessions do you have to share?