By Heather Iacobacci-Miller January 04, 2010
Well, this morning started of snowingly... We don't get much snow here. I really didn't even expect to see any when I woke up this morning. But there it was, and a balmy 24 degrees to boot. I have a 3-block walk from my parking lot to my office so I bundled myself up and pulled on my rain boots. I have a large bag that I can shove my purse into and regular shoes once I get to the office. Upon arrival, I realized I was missing one shoe. Not the way to start a Monday morning. I had to trek back out into the snow and cold with hopes that the missing shoe was in my car and not at home or on the street. Thankfully it was in the car.

So, that was the start to my week. One of those, "should have gone back to bed and started over" kind of mornings. I suppose I need to try to put a positive spin on the incident, so I'll just think of it as bonus cardio. Thankfully the remainder of the day went much smoother. No more lost shoes is a plus in my book.

My true cardio today was a short 15-minute run then spin class with Jason. After class it was most definitely time for dinner. We were both just short of starving and needed something fast, loaded with protein, and fast (did I already say that?). So we made a Veggie Chorizo Wrap.

1/2 can black beans, rinsed and drained

Options: diced zucchini, squash, green peas, or any other veggies of your liking

In small amount of olive oil, saute onions, bell peppers, and garlic until soft. Add the "chorizo" and sauteed until browned. Next add the corn and beans and spice to your liking.

Served in a whole-wheat wrap with shredded lettuce, tomatoes, and a drizzle of cheeseless queso. 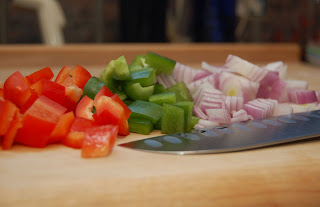 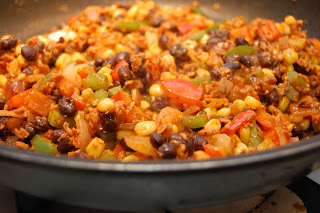 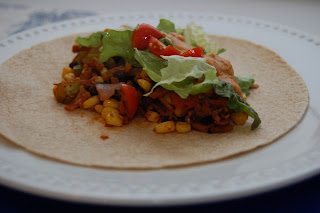 Gotta have a sweet treat after dinner. Last night I made another batch of the Sweet Tofu Yogurt from a recipe in Oxygen Magazine. I didn't have the fresh fruit suggested other than blueberries, and the only frozen fruit I had was a pineapple, mango, strawberry mix. So, mine was a Pineapple, Mango, Strawberry & Blueberry Sweet Tofu Yogurt. Again, I added a dash of cinnamon and drizzle of agave nectar to mine. This time I used a firm silken tofu rather than extra firm. I must say that I think I prefer the extra firm. It had more of a pudding texture that I enjoyed. I also liked the berry mix I used previously. It had raspberries that added a nice tang. That's not to say that this batch was bad by any means. Trust me, I ate a small cup of it topped with Kashi GOLEAN Toasted Berry Crumble (they still don't show it on their site) without complaint. 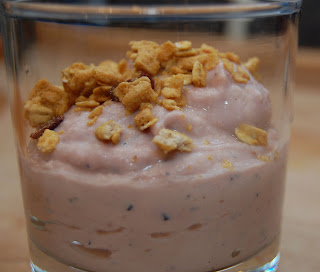 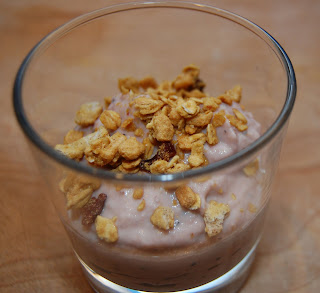