By Heather Iacobacci-Miller February 06, 2010
After waking up an hour earlier four days in a row to get my workouts done, I found myself up early on Saturday, my rest day no less. Really not thinking that's very fair. I almost went ahead and did a short cardio just 'cause. I talked myself down though and made steel cut oats instead. I am not sure I have a super healthy day ahead of me. So I wanted to at least start off on the right foot with eats. I made Peanut Butter and Banana Steel Cut Oatmeal. I wish I would have thought to have put in some raisins to make it more like a PB&J! Oh well, sock that idea away for another day. This recipe made 2 servings.
Peanut Butter and Banana Steel Cut Oatmeal
Ingredients:
2 cups water
1/2 cup steel cut oats
Dash of salt
Healthy dash of cinnamon
Splash of vanilla
1/8 tsp (or less) stevia
1 tbsp natural creamy peanut butter per serving
1/2 banana per serving
Directions:
Combine ingredients up to stevia in sauce pan. Let simmer on low until oats are cooked. Approximately 25-30 minutes. Stir in peanut butter and bananas to serve. 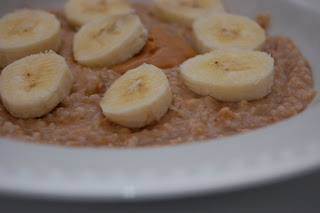 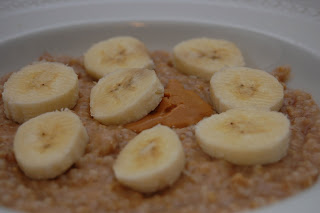 For lunch we're (as in Jason and I) are meeting my mom and sister at this great little place called Cafe 1217. They have soups, sandwiches, and also a case filled with salads and entrees (like tamales and such). They rotate out the menu monthly. They'll have vegetarian items for sure, so maybe lunch won't be too terribly unhealthy. I'll also be packing some Kashi bars and maybe almonds in my purse for later snacking.
Not sure if I'll be back today or tomorrow. Check out Oaklawn Race track if you get a chance. It's been around since 1904! Have you ever gone to the horse races?