By Heather Iacobacci-Miller March 24, 2010
Kicking and Running
This morning I got up when Jason did at 5 am. He left for swim and I opted for a kickboxing workout rather than step. I chose Cathe's Kick Punch and Crunch DVD because it also include a good stability ball abs workout. I didn't want to do a very long cardio session because Jason and I were planning to run at lunch. The great thing about this DVD is that it has tons of premix options. I also used 1 lb weighted gloves.
Do you ever use weighted gloves for kickboxing?
I was really in sort of a funk today. It was definitely a "Blue Day" for me. That's what my great-grandmother used to call down days. The sun was out early on, but then it started to cloud up around lunchtime. It's supposed to rain tonight and into tomorrow, hence part of the reason for running at lunch, get it in while it's nice. It did end up being mostly sunny by the afternoon. I was also hoping that I could run off some of the funk I was feeling. It was really nice to get out of the office and be outside with Jason. It helped my mood a little, but I guess it was just one of those kinds of days if you know what I mean.
I kept trying to remind myself of the many things I have to be thankful for and all the positives throughout the day. I even revisited some wise posts that I recently read with fantastic "thoughts to remember" by Jessica @ EatDrinkBreatheSweat and Candice @ ChiaSeedMe. Even though I read those words and they completely struck a chord with me, I needed more than words today. Nevertheless, they are great daily reminders to carry along (and share). I have a few ideas of why I'm feeling down, and I tried to work through those in my head and sharing with Jason. (Sorry for being a Debbie Downer.)
What do you do to try to get yourself out of a funk?
Wednesday Grilling
It's safe to say I wasn't really much in the mood for cooking or thinking anything fun and new to make. Jason offered to take over the dinner duties. With the weather being so nice, he was itching to grill as I've been the one wo-manning the grill lately. So, he grilled Quorn Naked Chik'n Cutlets with BBQ sauce. He also grilled broccoli and red onion to go over our nuked sweet potatoes (I was way too hungry to wait to grill them). It was sort of a meat and potatoes, manly-ish meal. 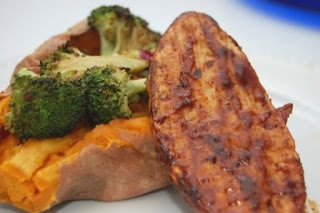 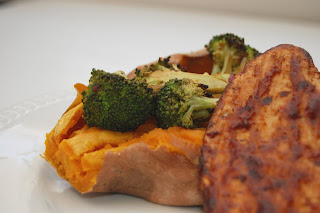 I really enjoy grilled broccoli. It adds just a slightly different flavor. I also love piling on veggies on top of my sweet potatoes, which I actually spice with a mix I pre-make that includes salt, pepper, cumin, red pepper, chili powder, and garlic.