By Heather Iacobacci-Miller April 18, 2010
Saturday Night Off
Last night I took the night off from cooking. I let Jason do the work while I sat back with a glass of wine. He made a healthier take on chicken piccata using a Quorn cutlet for a Quorn Picatta with roasted potatoes and roasted asparagus with lemon. The sauce was made by sauteing minced red onions, garlic, capers, and white wine. Just at the end you stir in butter. However, I took my sauce portion for the pictures before the butter was added, hence the chunkier sauce in the picture of my plate. If you like capers, then this is the sauce for you! 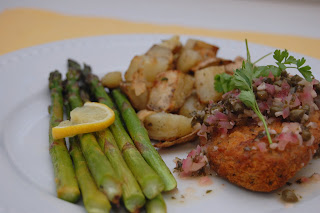 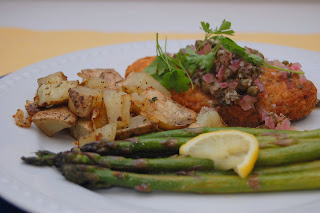 We ended watching House Bunny after dinner with a bowl of popcorn dressed up with raisins, cranberries and peanut butter chips. Thankfully the movies wasn't as bad as it could have been. It was a silly movie, but sometimes that's just what you want.

Lazy Sunday
The temps today are only in the mid-60's. A drastic change over last weekend's 80 degree temps. I was so hoping to be done with longer sleeves. Sigh. Anyway, Jason was scheduled to do weights today and we were planning on a run. I started off my day with a bowl of PB&J&B Oatmeal. I figured that would sustain me through the run.

After eating, I proceeded to sit my lazy butt on the couch and watch The Food Network. I became lazier and lazier the longer I sat. The thought of running was like pure craziness. However, I had committed to the run in my mind. It was super windy out, so of course that never makes a run feel particularly easy. My sinuses were all clogged up so I was having a really hard time controlling my breathing. All in all, it was a sucky run. But, I didn't slow down or stop, I pushed through and got it done. We only did 3.5 miles today. I felt a little disappointed with myself. But, each day is a new day and each run is different. I also did abs today and stretched. My hamstrings were killing me from yesterday's workout.

We had a super late lunch at Vino's today. Not the healthiest food at all. But we were just wanting to get out of the house, sit back and totally relax. Vino's is most definitely the ideal place to accomplish such goals. Since we ate so late, dinner is still undecided. It will be something very light I'm sure. Perhaps a salad or snacky plate. The plan is to relax and catch up on some DVR'ed shows this evening before heading into the work week tomorrow.