By Heather Iacobacci-Miller July 03, 2010
Running Recap
I must apologize for not having the time today to individually reply to your comments from yesterday's post. I did read each of them (more than once) and appreciate that you took the time to reply so thoughtfully - especially in regards to my running ramble. So apparently I did actually make some sort of sense ;-) I was surprised that more of you don't consider yourselves to be runners though. I think it's such an interesting idea - how we define ourselves and why.

Oh, and thank you all so much for your fun facts. I feel so much more normal - love you all! You're great! I found out how similar we all possibly are in terms of quirks. My pal Averie did a similar post and I found out (after posting on her blog) that we both curse like sailors ;-0 It's so much fun learning about each other I think. I do hope you enjoy the fun facts and aren't terribly bored with them yet.

Busy Bee: Workouts & Food Prep
This morning I was up before 7 am. I pretty much hit the ground running. I had a lot left to do before the party like assembling the Black Bean & Corn Salsa, the Sangria, cutting up fruits and veggies, and finishing up last minute chores. I did, of course, squeeze in my workouts for the day.

I decided to do more of a push/pull rather than push vs pull today. So I worked biceps, triceps, and shoulders. I love working shoulders, but they never seem to neatly fit in with push/pull. I decided to do the workout as a tri set for efficiency purposes. Don't know about you, but they seem to go faster for me. I did each set 3 times and exercises 8 reps.

I also did some stability ball abs then Cathe's MMA Boxing to round out upper body.

Another Recipe
Last night we did indeed have pizza. I wasn't sure if that's what we were really going to have. But, when I asked Jason what he wanted, he said, "Well, it is Pizza Friday." I also made some cookies for the party. I wanted something that was "American," so I found a recipe for Apple Pie Cookies at RecipeZaar. I was meaning to following the recipe this time, especially for baking. However, I realized that I did not. Go figure. They still turned out very good, but I imagine they would have been better had I used the right amount of applesauce. Which brings me to the point that I ended up having to make my own applesauce because we were out. Here is what I made, it was enough for about 3/4 cup (which is what the recipe had called for and I did not use all of)

Directions:
In medium sauce pan, bring water and apples to a boil, let simmer until soft. Add in cinnamon and liquid vanilla stevia to taste then mash. 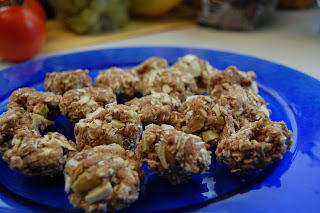 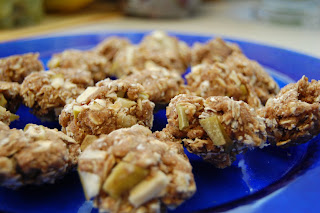 Mine did not spread out at all, so they cooked just as I had put them on the tray, sort of rounded. Next time I will flatten them out more and will use more applesauce. They only made 18 small cookies so be forewarned that you will want to make more! Oh, and the stats according to the original recipe were 48 calories per cookie. Not sure if any of my changes made much of a difference. Either way, these babies are good!

I promise to do a full party recap with tons of pictures tomorrow. I truly hope everyone has a terrific day! I look forward to catching back up with you all tomorrow.