Plan B Kind of Day

By Heather Iacobacci-Miller July 08, 2010
Plan B - Rest Day
Well, let me just say this, those hill repeats seriously kicked my ass (and quads). Yowzers. My legs feel like lead today. I feel like I did nothing but a million squats yesterday. All good though. It just meant that today was my rest day rather than tomorrow. I can bend a little, especially when there was no way I was doing anything that involved working my legs ;-)

Oddly enough, however, I woke up wide-eyed (not exactly bushy-tailed) at 5:26, which is when I have been getting up to go run. Apparently my brain missed the "rest day" memo. Do you ever have those days when you know it is going to be a mandatory rest day, but part of your body or mind is still thinking you should be working out? Maybe it's just because it's habit.

I have to say, when I don't post a workout, I feel like my posts are insanely short. But, short isn't always a bad thing right? Better than unnecessary rambling (which I'm beginning to do).

Plan B - Quorn Picatta
I thought I was going to make fajitas for dinner. I thought that would be super fast, super easy, and veggie filled. I realized that I was out of any protein for the fajitas or even mushrooms to pretend. What stinks is that we went to Whole Foods at lunch. I was going to pick up some tempeh, but they were out of all but the plain, which I don't care for as much. Figures right? Jason had mentioned making Quorn Picatta using Quorn cutlet. This is a dish that he typically makes, but I figured I could pull it off...surely. The last time we made it, I just listed the ingredients, but this time I thought I would actually give it to you as a real recipe:

Directions:
Saute red onions, garlic, capers, and white wine until onions are very soft and sauced starts to cook down and thicken. Stir in the parsley and lemon juice and season with salt and pepper if desired.

Optional: stir in small amount of butter to loosen up the sauce (I like mine without the butter). We've never tried using a vegan butter, but this might be a good option.

I served this with Smashed Cauliflower and Sauteed Green Beans, Red Bell Peppers, and Onions. 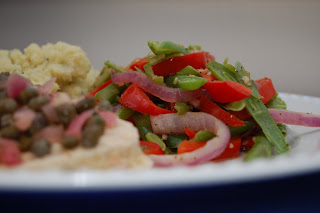 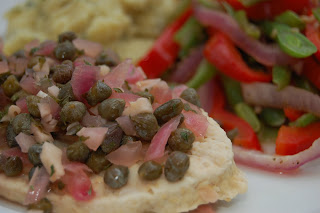 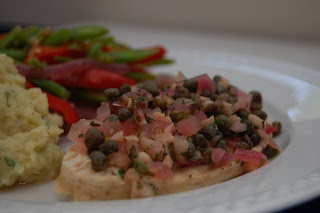 If you are a fan of capers, then I think you'd like this sauce. It would be good with other proteins like a grilled or baked tofu as well.