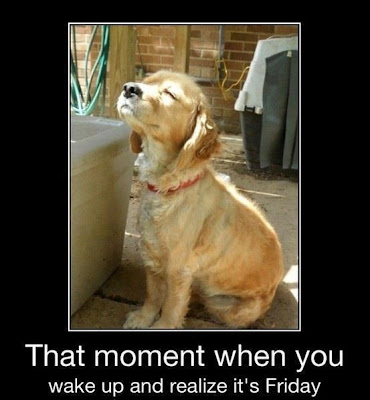 Well, it's Friday. That means Fun for Friday of course - as well as the Happy Friday Dance! It also meant my long run for the week. This morning I accidentally set my alarm 10 minutes earlier than what I had meant. That meant a 5 am wakeup call rather than a 5:10 wake up call. And yes, those precious 10 minutes do matter.

It was thundering with spotty lightening when I rolled out of bed. The plan was that Jason was going to run a couple of miles with me, then I was meeting Amy to run the rest of the miles. My goal was to get in 10.

It was sprinkling a little before we headed out. Jason actually asked, "Are you really going out in that?" Um, yes and so are you buddy. It wasn't bad though, the rain part. The humidity, however, was oppressive. I need to grow gills apparently. Have I mentioned before how much I hate humidity? No? Surely I have...

The rain stopped completely by the time I met up with Amy. Man I missed that rain. We were both dripping as if we'd been in a downpour. I was praying for that downpour mind you. It was a rough one. We had to stop for her to stretch her foot, then stop for traffic (thought that pause was much-welcomed), then stop for my foot. Hot messes on so many levels.

At least we were still able to chat it up, laugh a little, sometimes for no reason other than the shear absurdity of the humidity. That's what running partners are for though right? Help you get through those tough runs with a smile on your face.

I have no theme for this post. You'd think it would involve the run this morning. But I guess I already told you all about it. Sometimes theme-less is a-ok right?


Your turn - theme-less thought for the day OR theme or no theme?